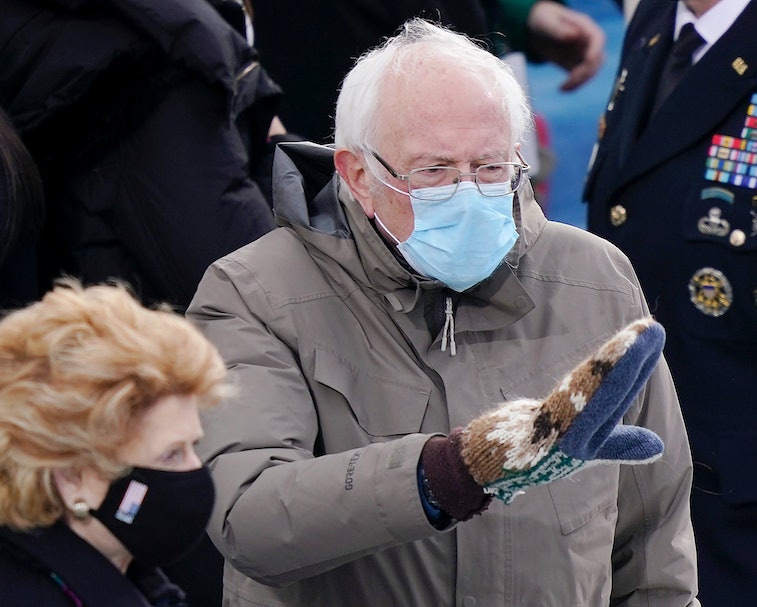 Bernie Sanders, proud shopper of Kohl's, has become the unlikely style hero of today's inauguration. In addition to the very same jacket he wore in a fundraising video-turned meme — made by Burlington, Vermont-based brand Burton — the senator rocked a pair of knitted mittens with a delightful and humble background.

According to Buzzfeed reporter Ruby Cramer, Sanders' mittens were given to him by a teacher from his state. Made with repurposed wool sweaters and a fleece lining sourced from recycled plastic bottles, the sustainable winter accessory is a perfect fit for the Democratic Socialist and supporter of the Green New Deal. It should come as no surprise that Sanders has worn them for years, as seems to be the case for his Burton jacket as well. The man found one Gore-Tex jacket and one pair of gloves from his home state and said, I'm set.

Sanders' modest, repeating outfit choice stands in stark contrast with another noteworthy style moment from the inauguration. Nik Ajagu, the husband of Vice President Kamala Harris' niece, wore a crisp pair of Dior Air Jordan 1s for the occasion. The highly coveted sneakers released last year for a staggering price of $2,000 — far from a signifier of the everyman. Wearing them in front of the entire country was an immense flex, the sort of peacocking moment sneakerheads dream of.

Two paths to drip — The dichotomy of these two inauguration fits, separated by generation and budget, embodies the two distinct paths to drip: old faithful vs. the hot, new shit. Both philosophies can prove successful, but it's Sanders that's most easily replicable. And as it's become clear that consumer spending must be reigned in as part of true sustainability in fashion, the pursuit of one good piece instead of countless options is the most responsible way forward.

Sanders and his mittens quickly became a meme for not only his curmudgeonly body language, but because of his complete disinterest in anything to do with fashion. Who has time to fuss over clothes when you're trying to lead a class revolution? Far-Leftists who support more equitable income distribution and who are also jawnz enthusiasts are well aware of the apparent hypocrisy that lives within them, but this is not a crisis in the headspace of one Bernard Sanders.

When you have a coat that repels wind and water or a pair of mittens to keep your hands amply warm, you don't need anything else. This restraint from excess spending has been espoused by Patagonia in its iconic "Don't Buy This Jacket" advertisement that placed the well-being of the environment over the brand's own financial gains.

"Buy less and buy smart" is the best credo for consumption, but following it requires discipline at odds with the culture of fashion and, to be honest, often our own coverage of the space. As much as I may tell myself I could always use one more fleece, the truth is I'm already well-situated sartorially for damn near any situation that may arise. I could trim down my wardrobe to a fraction of its current scale and live my life quite fine — fondness for variety aside.

While Sanders didn't buy anything new for the occasion, Ajagu's Dior Jordans looked like they'd never been worn before or, at the very least, had seen minimal use prior. Every sneakerhead has a pair (or, like, five) that they only trot out for select, special moments. For us, seeing Ajagu at the inauguration is both relatable and aspirational. If we had the same opportunity and were lucky enough to own those kicks, we'd very likely wear 'em, too.

In this life of dressing, you're either a Nik or a Bernie. But really, we should all be a bit more like Bernie.