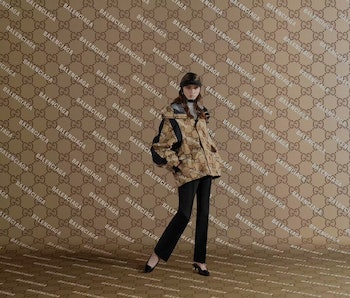 Balenciaga and Gucci’s landmark collaboration finally lands in stores today. Dubbed “The Hacker Project,” the link-up of the luxury-minded brands is an exercise in blowing up logomania to its most extreme. BBs and GGs are rampant, and the well-funded masses with taste of questionable levels are already gobbling up the goods.

Select items have already sold out, including several of the bags and accessories that have seen Gucci’s monogram reconfigured with Balenciaga marks. That formula is more or less the beginning and end of the ideation behind all the clothing and accessories that make up the capsule at Balenciaga’s point of purchase, with stray “This is not a Gucci bag" graffiti thrown in here and there, but the mere truth of their existence is enough for hype-minded consumers to exuberantly press “purchase.”

Prices start out at $195 for the BB monogram socks and top out at $3,350 for the Hacked BB Puffers, all of which have also sold out already. If you’re looking for something a bit more imaginative, and perhaps nominally less ostentatious, we turn over to Gucci for the second half of the collab.

There’s a tad more variety to be found on Gucci’s website, notwithstanding the original “GG” monogram overlayed with Balenciaga’s sans-serif logo. This arrangement can be found on a $4,500 technical jacket made out of canvas, as well as a range of bags and even the Balenciaga Triple S sneaker ($1,290) now years removed from its reign as “it” shoe of the moment.

Standing tall on its own is an unadulterated monogram Hourglass Jacket ($5,980) for women with a matching skirt ($1,980), a ruffled lycra top ($2,700) with red and green striping and a crystal and pearl brooch, and plain black silk pants with a rolled-up hem ($1,500). Elsewhere, you’ll find an additional floral print more subtly incorporating Balenciaga’s name on pumps ($980), knife boots ($2,500), another set of Triple S sneakers, and additional apparel.

While Gucci does a better job of justifying an unprecedented partnership with another luxury house, the whole thing reeks of a cynical read of the market that says “we should make this because people will buy it.” It’s a two-pronged collection too big to fail, and any indictment of the affair lands equally on the consumer as the parties eager to give them what they want.