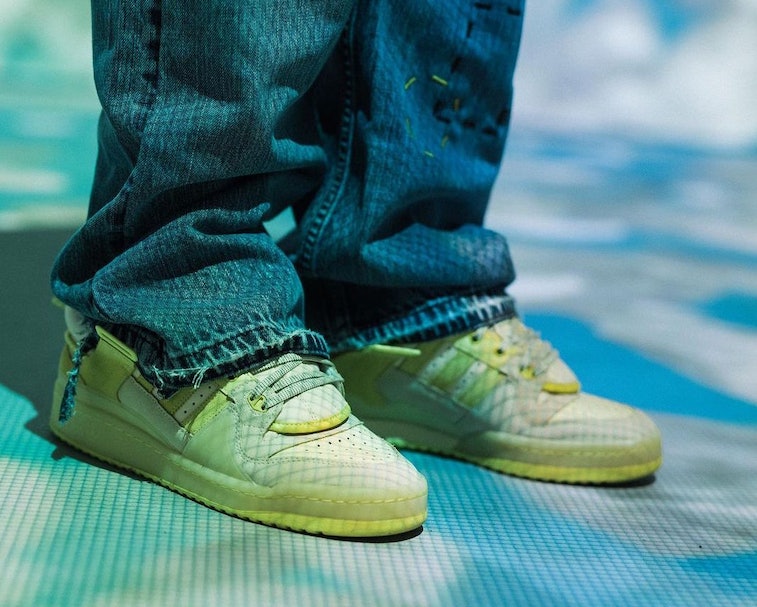 Bad Bunny is about to cure seasonal depression. The Puerto Rican reggaetonero is adding another colorful shade to his iconic Adidas Originals Forum Low sneakers.

The bunny always lands on his feet — Following the existing color palette of The First Cafe, Back to School, and Easter Egg, it looks like the superstar and Adidas are getting ready to introduce a new, super bright “yellow” color. Janthony Oliveras, Bad Bunny’s creative consultant and childhood bestie, revealed a never-before-seen glimpse of the sneaker via Instagram. It comes dressed in panels of banana and pale lemon, a muted effect similar to the Easter Egg pair, on its comfy, extra-wide construction. The tongues are double stacked and secured with a buckle, while the heels feature a snug bungee cord and oversized cushion.

First Cafe and Easter Egg versions are reaching resale prices of $1,388 and $764, respectively, while the Back to School iteration sits at a more affordable $329. Benito’s Forum Low has been StockX’s most wanted Adidas sneaker, apart from Yeezys, so be prepared for a WWE fight to get this fresh version when it eventually drops.

Hot on the heels of his historic show in Puerto Rico this weekend, the announcement proves El Conejo Malo always has a few tricks up his sleeve. Benito, with a budding acting career, upcoming tour, and more Adidas collabs on the way, will probably have his busiest year ever in 2022. With so many ways to support Bad Bunny lately, blame Maldita Pobreza (damn poorness) as an excuse not to participate.

How to buy — Lo siento BB, but there’s no telling yet whether the “Yellow” sneakers will see a global release or if it’s just a tease like the mysterious White Bunny version. However, since Oliveras took to IG to announce the Core Black color too, it’s safe to assume you’ll be able to cop a pair soon, hopefully. Rock them with his Cheetos tracksuit and you’re all set for El Ultimo Tour Del Mundo next year.