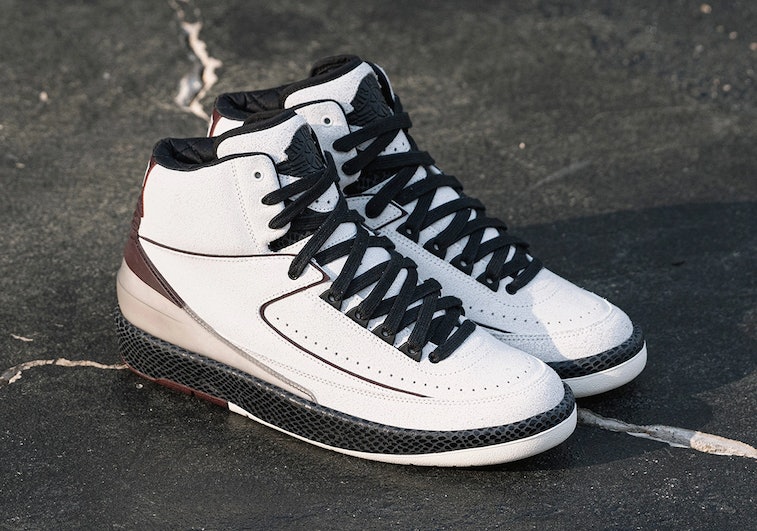 After releasing an elegant Air Jordan 1 and Air Jordan 3, A Ma Maniére is completing its footwear trio with its own take on the Air Jordan 2. The sneaker, teased in a short film dubbed “Your Airness,” is finally set to arrive in the coming weeks following months of leaked images and rumored release dates.

Like its predecessors, the Air Jordan 2 features an understated color scheme, taking on a white base with burgundy accents. Its upper is made of high-quality cracked leather, which adds an aged look to the sneaker that doesn’t take away from its elegance. Scale-like patterns land throughout the pair, most notably across the midsole, as A Ma Maniére branding sits at the heels. An embossed tag hangs on the laces, while quilted lining on the interior creates a plush environment to step into. Co-branded insoles highlight both AMM and Jordan Brand, with more co-branding covering the packaging of the limited-edition shoes.

Air to the throne — Fitting the luxurious theme of the Air Jordan 2 itself, the campaign video captures spoken word artist Kyla Lacey reciting an original poem directed towards the Black community. Motifs that have appeared in past A Ma Maniére narratives — like roses growing through concrete, Black mothers with their children, and Black creatives expressing themselves through clothing — are highlighted throughout the video.

Lacey’s poem also nods to the Black community that popularized streetwear and sneaker culture by pointing out how those same people are now being left out of the space they created. Part of being Black, she says, is about having to rise above obstacles: “Heavy is the head that wears the crown,” Lacey recites, “but light are the feet that catch the Airness!”

Catch air — Just who will able to catch the Airness remains to be seen. Past A Ma Maniére releases have prioritized women with in-store raffles, where they had to show their government ID and shoe size to inhibit resellers from cheating the system. It’s unclear whether AMM plans to give anyone a similar right of way, or if its sneakers will be subjected to a lottery-based draw.

A Ma Maniére has announced that its Air Jordan 2 will launch on May 13, with pairs available exclusively at the boutique’s website. Expect there to be major demand for the sneaker, especially considering its meaningful back story.