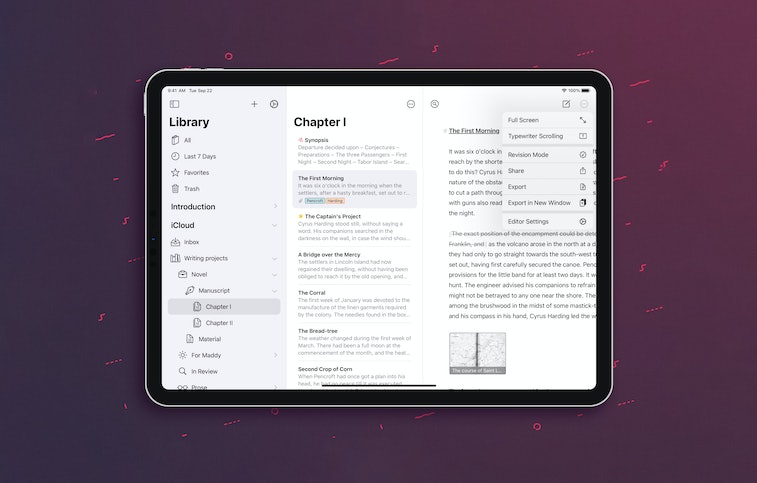 Most word processing apps fit a standard formula in 2020: a white rectangle to type into, a toolbar with way too many formatting options, and maybe some extended mail-merge or citation features. It’s an application style popularized by Microsoft Word, and one that’s taken off because it works well. But Word is more than two decades old. It’s practically an antique at this point.

Ulysses presents a worthwhile alternative to the tried-and-true word processor. It’s a clean, user-friendly app with a prime toolkit and simple cloud-based synchronization. And it’s only $5 per month to use it across all your devices.

A Markdown-based word processor with a focused interface that will have you ditching Google Docs for good.

The basic premise of Ulysses is one of simplicity for the sake of focus. Much like Word, the bulk of the app is a blank canvas for writing; unlike Word, Ulysses recognizes that a ton of contemporary writing isn’t done with the goal of eventually printing it to a piece of 8.5”x11” paper. The typing experience is freeing for this reason. You’re not constricted by the boundaries of paper. You’re typing into a window, and it’s one that can be re-sized however you like.

This is, in general, Ulysses’ philosophy: we’re living in a world where the internet rules more supreme with every passing day, and it’s time to act like it.

Ulysses also understands that you’re not always going to be completing your work on the same computer. Ulysses syncs files effortlessly through iCloud and includes options to do the same with files on your Google Drive, Dropbox, or even your hard drive. This happens automatically in the background without a hitch. I can open the Ulysses app on my iPhone while I’m waiting for my curbside grocery pickup and jot down a few more lines of a piece while it’s fresh in my mind. Or if my laptop is acting up — as it tends to at the worst times — Ulysses lets me pick right back up on my iPad instead.

One of Ulysses’ flagship features is its use of Markdown, a way of formatting text without the use of buttons on a menu bar. Markdown is sort of like a streamlined version of HTML made with word-processing in mind. Rather than lifting my fingers off the keyboard to choose the strikethrough tool, I can just put “| |” on either side of a word or phrase. The same goes for highlighting (: :), creating hyperlinks ( ), adding meta-comments (+ +), and block quotes (>), just to name a few. Assigning heading levels is as easy as using a series of hashes; bolding text uses asterisks; italicizing text uses underscores. This can take some getting used to at first, but it also has the distinct potential to streamline your writing process.

I feel like I can type anything and everything in Ulysses. I can make grocery lists that sync with my phone. I can type posts for Input and easily export them in whatever format I please. I can organize a novel into chapters, set a target word count goal for each day, and work on it across any of my devices. You can even publish directly from Ulysses to Medium, WordPress, and Ghost, if you’re into blogging or any other self-publishing on the internet.

I feel like I can type anything and everything in Ulysses.

Ulysses is also very, very good with version control. The program completes extensive, timestamped backups automatically, which you can then restore at will. That’s priceless when you realize you accidentally deleted a paragraph somewhere in your process and have no memory of what it said. Ulysses even has a dual-editor option to view two versions of the same document side-by-side for revisions’ sake.

If there’s any downside to Ulysses, it’s that it’s only available right now for Apple devices. Sorry, Android and Windows fans, guess you’ll be sticking with Google Docs for the time being.

Ulysses may not be free, but it’s just $5 per month for access to the app across all your devices. That boils down to less than a quarter per day — a meager sum, given how much you get for it. Ulysses proves that, at least when it comes to word processors, tradition just can’t hold a candle to the future.