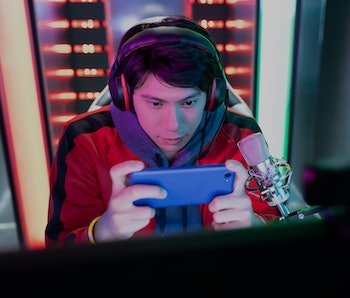 Don’t let the slow, (admittedly avoidable) downward spiral of services like Google Stadia fool you: video game streaming is here to stay. Not only that, but the heaviest of heavy hitters are expanding even further into the market. This morning, Microsoft and Xbox officially announced the limited beta launch of Xbox Cloud Gaming via web browsers for Windows 10 PCs, as well as Apple iPhones and iPads. Beginning tomorrow, select Game Pass Ultimate subscribers will begin receiving email invitations to test the service, with more invites to follow in the coming weeks and months.

“Offering cloud gaming through the browser and having a simplified, universal landing page presents a great opportunity to make cloud gaming approachable to more players in more places over time,” reads the official press release from Xbox... which is very diplomatic, and totally not an ingenious streaming workaround for the Apple App Store’s “Mafia extortion” tactics and concerted efforts to stymie competitors’ options.

As if you needed any more reason to subscribe — Since its launch last year, Xbox Game Pass has quickly established itself as one of the top benchmarks for digital gaming platforms, from its initial wide array of AAA games to the affordable $14.99 per month rate and the regular addition of new, massive franchises to its catalog. (To be honest, we’re not sure how they are profiting off the service, although company execs assure everyone they’re doing just fine) In any case, the new move to court not just PC gamers, but the Apple consumer base, is genuinely a big deal.

Taking direct aim at Apple — Even the most diehard of iOS zealots can probably admit the company’s approach to third-party apps, much less video games is — to put it less diplomatically — pretty crappy. The new expansion of Xbox Game Pass into non-Microsoft territory via supported web browsers like Edge, Google Chrome, and Safari will allow even the most entrenched Apple adherents to start forking over their cash to one of the company’s fiercest rivals.

We’re not usually the sorts who pick sides between massive tech behemoths, but we’re gonna have to chalk up a win for Microsoft on this one. Not that anyone needs more reasons, but Apple’s approach to video games is some of the best evidence for reining in the company.