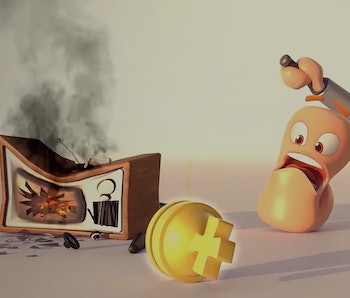 It's been a bracing few weeks for Worms developer and indie publisher Team17. Now, after a doomed NFT push, CEO Michael Pattison told employees in a meeting that the company will change following last week's searing workplace report from Eurogamer.

That report detailed a wide range of alleged issues at the workplace, including complaints of low pay, a culture of overwork, and the studio's HR department minimizing sexual harassment complaints, among many others.

Something has to give — According to Eurogamer's follow-up piece, Pattison said that there would be a pay review for staff in the company's QA department. (The report alleged a £16,000 [about $21,500] starting rate for QA staff, which is far below the market rate for such positions.) Pattison discussed nearly every issue in the report, saying that he's "committed to taking action."

The CEO noted that Team17 is "struggling," in part because of staff attrition, and because the studio has been taking on too many projects. The only issue that Pattison did not discuss was allegations of poor management by the studio's owner, Debbie Bestwick. There were several pointed claims made about Bestwick in the Eurogamer report, including that she asked staff to wrap her family's Christmas presents for her. (That's what we call a total Scrooge move.)

Reasons for hope? — Several of Eurogamer's anonymous sources said that they're cautiously optimistic that the report will produce results, though they said that they'll believe the results when they see them. It's worth noting that all this began due to Team17's bizarre NFT push, which was widely-reviled not only by fans and journalists, but by Team17's own roster of indie studios as well.

Unfortunately, Team17 is far from the only studio to try to cash in on the current NFT hype, but it's fair to say that they've suffered a lot of consequences from the move. Let’s hope it can spur some real change.