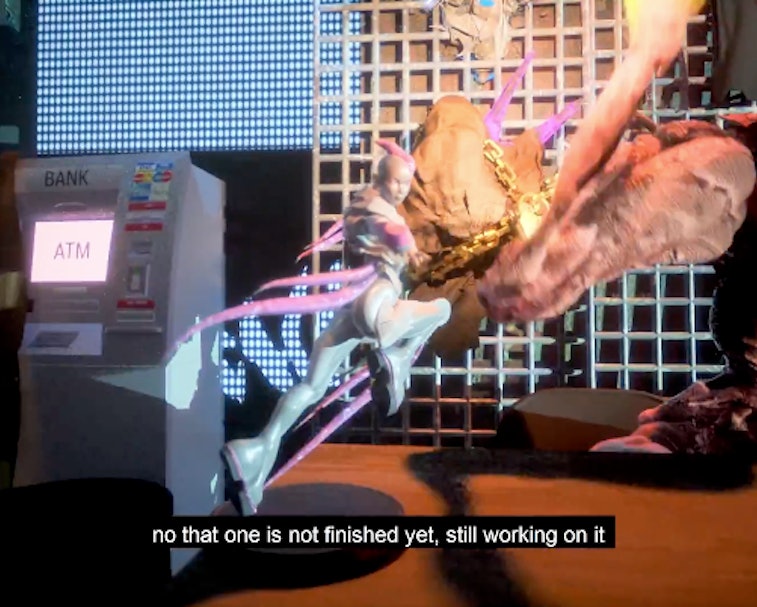 Team Rolfes, a digital studio that produces eye-catching animations through the use of cutting-edge motion-capture technology, is auctioning off concept art to raise funds for an upcoming "musical physics game." But not any art, of course — digital concept art that's been minted on the blockchain, and which comes from the very game they're hoping to pay for with the initiative.

Exclusive hype hive — There's not much known about what the eventual game will look like, but an animated video released with the auction shows some sort of discombobulated character at a merch stand pitching the sale. The first piece listed Thursday includes a digital mesh "hype hive" and an exclusive beat loop from the producer Kai Whiston. The owner will also be granted the "loud" player rank in the game when it's finished.

One person already purchased the art yesterday and immediately put it back up for sale. The current asking price? 420.69 wETH, which in United States Dollars amounts to $645,931. wETH is an Ethereum-based cryptocurrency.

Unless you've been living under a rock you know that price is a joke, though Team Rolfes hopes the art will trade hands for a pretty penny. The way wETH works, every time the artwork is re-sold, Team Rolfes receives 10 percent of the proceeds... in perpetuity. On Twitter, Sam Rolfes says they're hoping to raise enough to employ for or five people part-time on the project. He said they might list several other pieces for sale, too.

Digital art — The fundraiser is being hosted on Zora, an NFT marketplace for buying and trading limited-edition digital goods. In essence, an NFT, or non-fungible token, is a digital signature that's encoded into a digital file and that proves its uniqueness. When a piece of art is uploaded to the Ethereum blockchain, for instance, it is hashed so only one instance can ever exist on the ledger.

That scarcity creates implicit value because only one person will be able to claim "ownership" of the art. It's still possible for anyone to look at it on the web, or even download it, which makes this all kind of an abstract idea. But some people might find value in supporting their favorite artists and being able to say they own the only "autographed" piece. The market for NFTs is estimated to be around $100 million today.

Blockchain technology has been criticized for using significant amounts of electricity, and Team Rolfes says it will use some of the proceeds from its sale to purchase carbon offsets, "which is an imperfect solution for the time being," Sam says. But at least he's thinking about it.