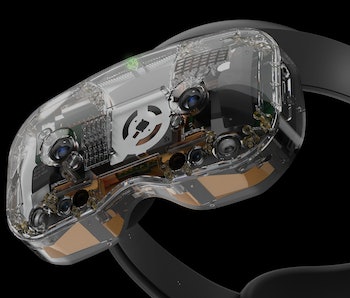 It only takes the slightest glance at Facebook’s track record to see Mark Zuckerberg really shouldn’t be left to dominate the augmented / virtual reality sector. But with Oculus, that’s precisely what he’s trying to do. Thankfully, third-party contenders are emerging to give the Big Tech giant some true competition — by our estimates, the most promising of the pack is the upcoming open-source-based, “mixed reality” headset, Lynx, which aims to loosen Zuck’s tightening grip on the space as early as next year.

As the likely next realm the internet is going to morph into, it’s no wonder Zuckerberg would love to own the metaverse, or the devices we use to connect to it. Let’s be honest, the Facebook Czar would love to possess pretty much everything he encounters, but he’s particularly jazzed about VR and augmented reality headsets at the moment.

Unfortunately, VR / AR tech requires a certain amount of funding, time, and market share, to truly get off the ground with consumers, which means there really just aren’t all that many options at the moment apart from Sony’s PlayStation VR and Facebook’s Oculus line. The former promises to be relatively pricey in the years ahead, and the other is... well, it’s from Facebook, so that kind of says everything you need to know. That, and the Oculus Quest’s all-but-required Facebook account.

But Lynx is hoping to offer something else. Get a closer look at its design below, along with details for Kickstarter plans and release timeline for the mixed reality headset.

Lynx’s plan to stay out in the open — Key to Lynx’s strategy is its commitment to an “open ecosystem,” the headset’s creator, Stan Larroque, explained to Input via email. “Our SDK will open-source, you'll be able to customize the launcher and experiences to a great level and we also push for OpenXR to maximize cross-compatibility between devices. We need this in the industry.”

According to Larroque, his team also plans on supporting as much software as possible from Day One, including SteamVR. “Some developers are already porting their games and apps to the Lynx platform,” he teases, although no specific names or titles were provided.

Potentially pricier, but transparent — While exact numbers aren’t available yet, Larroque says that his team aims to announce the consumer price next month, and that they’re trying to ensure their headset remains in the sub-$1,000 range. That’s definitely a bit pricier than a Quest 2, but it certainly sounds like customers will be getting exactly what they pay for.

Last week, Larroque offered an update via Twitter on Lynx’s progress by noting that the company decided to remove the device’s eye-tracking tech for space and cost reasons. Many had already pre-ordered a Lynx, so to compensate, Larroque promised to “reimburse all previous preorders and give back also a promo code” for the upcoming Kickstarter.

Speaking of that Kickstarter — On that note, Lynx’s official Kickstarter is set to go live in September, with an eye to start shipping the headsets to customers in February 2022. A number of order options will be available, but our eye is definitely on the Lynx Special Edition, which promises to ship with a fully transparent front face cover.

It’s still early for third-party VR / AR headset options, and with any luck, many of us just might skirt around ever needing to strap on an Oculus for our “mixed reality” excursions thanks to companies like Lynx.