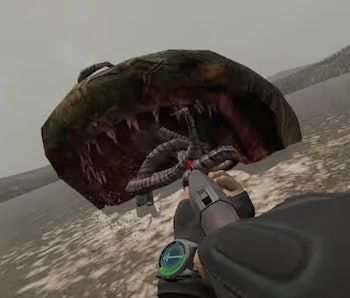 Back in April, we saw the first in-depth preview for the Oculus VR remake of Resident Evil 4, and now we know when it will be available: October 21. Capcom partnered with Oculus Studios and Armature Studio on the virtual reality version of the popular survival horror game, with updates designed specifically for use with room-scale movement and dual-handed controllers.

Resident Evil 4 was first released all the way back in 2005, but the mechanics stand the test of time. You play as Leon Kennedy, who must overcome hordes of zombies to rescue the President’s kidnapped daughter. Virtual reality introduces a new level of immersion — grabbing items like weapons now involves using actual hand movements.

Remakes keep coming — Oculus has struggled with a lack of major, AAA titles, so the release of Resident Evil 4 is a welcome addition, even if it’s a bit old. Virtual reality will surely breathe more life into a game that publisher Capcom has repeatedly re-released onto new hardware, like the Nintendo Switch. There’s nothing wrong with remastering an old title for a modern system.

Honestly, if it helps preserve old games rather than making them harder to play, that seems like a good thing. For Facebook-owned Oculus, big-name titles could help draw in more players.

Quest 2 only — Unfortunately, it seems that other VR hardware like the original Quest, the Rift, and Sony’s PlayStation VR are being left out here. But the Quest 2 is arguably the most successful VR headset to date, thanks to its wireless, all-in-one package that requires not much more than a Wi-Fi connection. And now that Oculus has doubled the storage capacity of the Quest 2, it’s even more compelling. If only it wasn’t owned by Facebook.