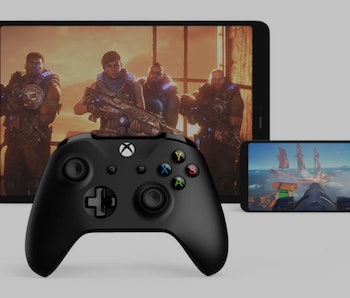 Microsoft has announced that its xCloud game streaming service will be available on Android starting September 15th for all subscribers to Xbox Game Pass Ultimate. Anyone can sign up for the service for $15 per month, or $1 in the first month, and gain access to over 100 popular titles streamed over the internet, including games like Gears 5 and Destiny 2.

xCloud has already been available in closed beta for some time but access required receiving an invite.

xCloud started out as a quiet, experimental copycat of Google's Stadia service but has quickly become the frontrunner thanks to Microsoft's huge collection of first-party titles that are already available on the service. Many AAA titles are included in the monthly fee, and eventually users will be able to play across Xbox, PC, and Android so long as you have a connection of at least 10 Mbps. At launch, streaming from PC won't be available.‌‌

Xbox is the gaming of Netflix — It's clear that Microsoft sees xCloud as the future of Xbox, and it's not hard to see why. By dropping the need to buy a $300+ console and individual games, Microsoft is opening itself up to many more potential customers who may otherwise never have gotten into gaming because of the cost. It's moving towards the the Netflix model — Microsoft just needs the amount of money it receives from subscribers each month to equal more than the amount it spends developing new games. Gamers will always come back to play the classics like Halo, so with enough time each title pays itself off and becomes straight profit.

Some gamers may still prefer to own their games outright, and Microsoft hasn't indicated it intends to stop selling disc-based games anytime soon.

The Series X is just a box — This also means that the upcoming Xbox Series X is going to be much less important in the grand scheme of things. You're going to be streaming your games from a powerful computer sitting somewhere else in the world. Of course, not everyone has a good enough internet connection, and frame rates will drop more often with a game streaming over the internet. So plenty of hardcore gamers will still want the console and ownership of all their titles. But casual gamers are likely going to appreciate all the advantages of xCloud and never even care to buy a console.

There are even new accessories designed around gaming on mobile, including the Razer Kishi gaming controller for Android devices. If you've ever been annoyed by Apple's monopoly control over its platform, now is the time — it seems unlikely iOS will get access to xCloud anytime soon.

It's hard to see how Google even competes at this point. Stadia had everything going for it, especially Google's vast network of worldwide infrastructure including server farms from which to deliver games. It hasn't been able to get those games, though, and that's really all that matters.