“None of the copies we've offered of this title previously could even attempt to hold a candle to this one due to its incredibly rare variant.” 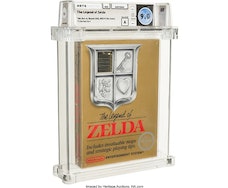 An early, sealed copy of The Legend of Zelda is up for auction with a current bid of $110,000. The iconic game was first released in Japan for the NES in 1986 before reaching United States in 1987, and we all know what it went on to become.

The copy that’s up for auction is from 1987, a revised production version that was manufactured for only a few months. According to Heritage Auctions, which is hosting the bidding, it’s never sold a copy rarer than this one. It’s the earliest copy the auction site has ever seen; only a single copy of the earlier production version is believed to exist.

“While it is a hard truth, it is a truth nonetheless — none of the copies we've offered of this title previously could even attempt to hold a candle to this one due to its incredibly rare variant that holds early production status,” the listing reads. “This matter is completely inarguable. This is the only copy from one of the earliest production runs that we've ever had the opportunity to offer, and, possibly will have the opportunity to offer, for many years to come.”

Thanks to its innovative gameplay and adventurous nature, the Zelda franchise grew to ubiquity and nearly universal acclaim. The original Legend of Zelda game was the fourth best-selling NES title of all time. Since its release, successive titles like Ocarina of Time and Breath of the Wild have received outstanding reviews from the public. The Zelda franchise is a big draw for Nintendo’s latest and greatest consoles.

Rich people stuff — Auctions of ultra-rare retro video games come up every now and then with similarly eye-watering prices. Just a few months ago, a sealed copy of the original Super Mario Bros. went up for auction and sold for more than $600,000.

We couldn’t imagine paying these prices. But if you’re a wealthy individual who grew up with these iconic characters, it might well be worth it to you to get an early copy of the games.

If you want this rare copy of Legend of Zelda, the minimum bid is currently at $115,000.