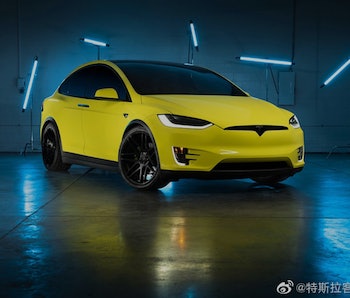 Tesla has launched its own car wrap service in China. New owners in five cities can have their cars wrapped before delivery, while existing owners can bring their vehicles to a service center to trick out their ride with a new color scheme. Tesla has previously been criticized for the limited palette of hues it offers it cars in. It's also good practice for the wrap service that may be the only way to customize the steel panels of the upcoming Cybertruck.

Tesla's customer service account on Weibo confirmed the new service, according to Electrek. "Tesla is more and more common on the road, and it is getting easier to recognize the wrong car at the charging station. How to make your Tesla different and stand out?" the Weibo account asks. Ah yes, a very relatable problem indeed.

Win-win – The service is notable because Tesla offers its vehicles only in a limited selection of colors in order to simplify production. The company says the first five cities where wrapping is available are Beijing, Shanghai, Guangzhou, Shenzhen, and Suzhou, with more cities coming in mid-August. If you want to make your car go faster, you're going to need to add some racing stripes to the sides. Unfortunately, however, it sounds like Tesla is only offering solid colors for now.

It's not clear how much Tesla is charging for a wrap job, but in the U.S. it costs between $2,500—4,000 on average to wrap one of the company's cars. That's a lot, but if you're buying a $40,000+ car it might not seem unreasonable. Wraps are great because, of course, you can change the color or add graphics as often as you want (or can afford to). They're also good for protecting against scratches from chips and scratches.

Tesla CEO Elon Musk has said that the company's futuristic Cybertruck will only come with the stainless steel frame as the body and that customers who want a different color will need to wrap them. There's no word on when this wrapping service will come to the U.S., but surely it will at some point, especially if Tesla's going to be offering it as a service for its Texas-built Cybertrucks. Considering new Tesla owners continue to complain about the quality of Tesla paint jobs, it can't come soon enough.