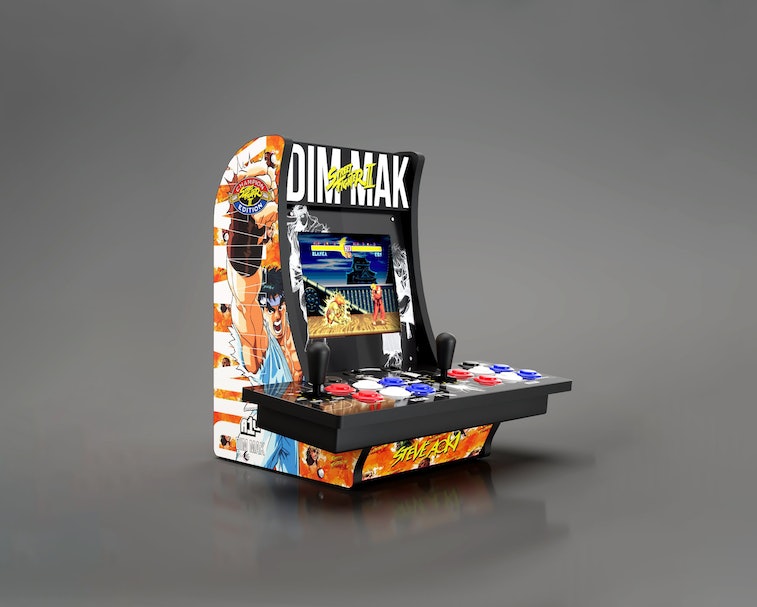 DJ Steve Aoki, a self-professed Street Fighter fanboy, has collaborated with Capcom on a new range of limited-edition items themed after the popular fighting game, including a countertop arcade cabinet, a clothing line, and a remix of the classic theme song for Street Fighter's main character Ryu. But before you get your hopes up, the $199 arcade cabinet is already sold out. Sorry.

There's still plenty of apparel available on Dim Mak's website, however, featuring the logos for Street Fighter and Dim Mak, the record label and merchandise company owned by Aoki. All of the items also feature original art from the Capcom archives. The meshing of streetwear culture with Street Fighter makes for some pretty attractive gear.

Fashion brands have been doing ever more collaborations with popular gaming and anime brands that breed nostalgia — Levi's recently dropped Pokémon denim that see its cute characters appear all over jackets and jeans. Even Gucci has looked to capitalize on beloved anime characters with its Doraemon x Gucci capsule. Nostalgia and cuteness is a powerful combination.

Aoki's main — The remixed theme song, titled “Ryu’s Theme (The Moe’s Pizzeria Steve Aoki Remix),” won't be dropping until February 19, but there's a pre-release webpage where you can pre-save it to your favorite streaming service. The name is a reference to Aoki's childhood where he visited a local pizzeria to play Street Fighter every day after school.

Besides being an iconic song, Aoki told The Verge that he chose to remix "Ryu's Theme" because that was his favorite character to play in Street Fighter II. "He represents the strong, iconic, Japanese warrior hero that I always aspired to become,” Aoki said. Ryu is famous for his iconic catchphrases, like "Every moment gives us a chance to become more than what we are."