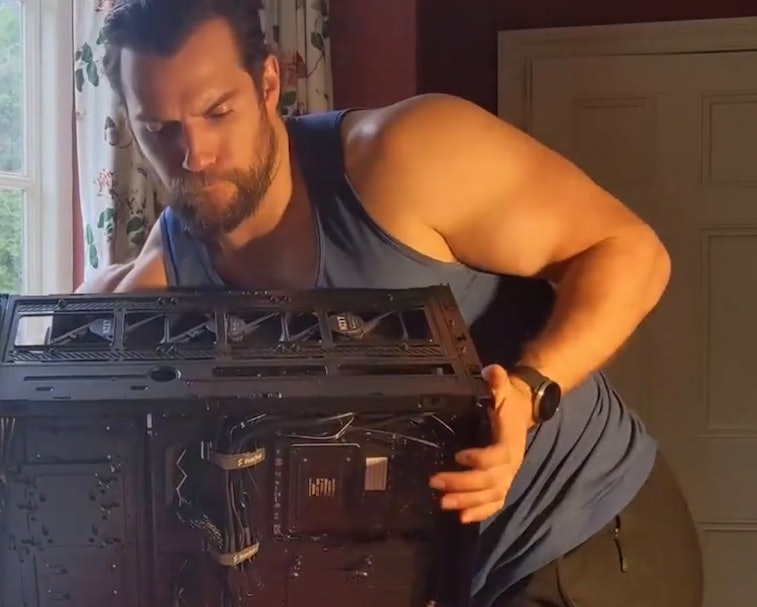 Every once in a while a video pops up on our feeds that makes us remember why it can, occasionally at least, feel good to be alive. Today’s entry: a five-and-a-half minute view of Henry Cavill building a computer from scratch.

The Superman actor posted the clip to his Instagram’s IGTV page this morning and, unsurprisingly enough, the internet is going wild for it. The video is self-filmed and set to Barry White’s 1974 hit “Can’t Get Enough.”

“This kind of material isn’t for everyone… viewer discretion is advised,” he wrote in the caption. “You may see a lot of parts that you haven’t seen before.”

To be honest, Henry, the parts you used are fairly standard. But those arms… well, we’ll show some restraint here and just tell you to watch for his arms, if nothing else.

Quite an undertaking — Though the video is pretty short, the build itself took Cavill quite a while. He begins in daylight hours with a motherboard assembly and continues his process well after the sun’s gone down, using a bright light for guidance.

Bonus points for not straining your eyes, Henry.

Useful tips — Most of Cavill’s video is not narrated, but he does take a few moments to display helpful tidbits he learned from his own process.

Cavill follows a set of instructions for the build, and he does a fairly stand-up job doing so. And when he does need to correct his own mistakes he’s transparent about it. There’s not much more you can ask from a man, is there?

Did we mention his arms? — There’s a lot to consider and unpack here, but Henry Cavill’s arms deserve some special attention.

This moment was weird though — Not sure why he decided to stroke the processor chip in slow motion. Maybe the worst moment of the video. Probably the only reason to deduct points from the overall score here.

It works! — By the end of the video, Cavill does have a working computer. He only has to take it apart once after the initial build, and that’s for aesthetic reasons, really. Cavill is good at following instructions, it seems. And he’s really hot. Did we mention his arms yet?