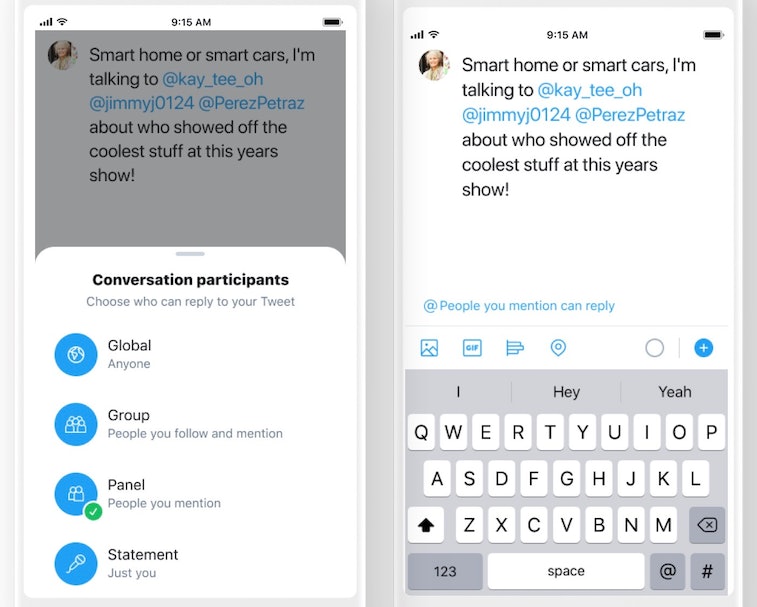 CES 2020 isn't only about fancy electric cars or cute robots from tech giants — social media companies are also trying to make a splash at the show. Today, Twitter announced that it will soon start letting people choose who can reply to them before they compose a tweet. This is part of a new feature called "Conversation Dynamics," which will give users more compose controls over who can interact with their tweets. Right now, you can hide who replies to your tweets after the fact, but Twitter says it wanted to do more ways to manage their interactions.

Some of the options people will have are: Global, Group and People You Mention, so if you only want to get replies from close friends, soon you're gonna have an option to do that. This may not completely solve Twitter's abuse and harassment issues, but it definitely has the potential to make a notable impact.

More focus on lists — Aside from Conversation Dynamics, Twitter also announced that it will soon have add a discovery page for lists to its app, making it easier for you to subscribe to lists of people you may be interested in. Since last year, Twitter has started to place more focus on lists, and last year it started allowing people to pin them on the app.

While they still may not be as functional as on TweetDeck, it's great to see Twitter make an effort to improve how you can use lists on its main application.

Health, conversations and interests — Kayvon Beykpour, Twitter's product lead, said that in 2020 Twitter will be focusing on three key areas: health, conversations, and interests. He said that, in 2019, over 50 percent of the abusive tweets the company removed were done proactively, meaning before they were even reported by people. That was double the number from 2018, and he says the plan is to continue using Twitter's machine learning and humans to make the app safer.

The one concern with a features like Conversation Dynamics, which give people more control over their tweets, is that it itself might be used as an abusive tool. What if you tweeted a lie and there was no one in your replies to debunk it? Twitter told Input it has thought about this and that a way this scenario could be avoided is by still letting people quote tweets that have the potential to be harmful and spread misinformation.

Twitter says it will be closely monitoring how people use this new hide-replies feature, adding that it plans to start publicly experimenting with before Q1 2020.