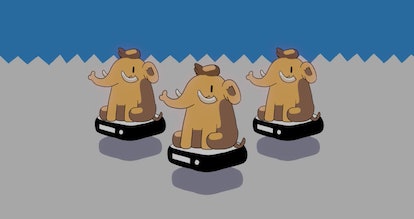 It’s been two days since Trump announced Truth Social — his new-new alternative social media platform — and it’s already rivaling the MyPillowGuy’s train-wreck attempt at cobbling together an online bullhorn for literally the worst people in America. In fact, it sounds like Truth Social might not ever even get off the ground, all thanks to the fact that it apparently is just a straight-up clone of the decentralized social media network, Mastodon.

“Early evidence strongly supports that Trump's Group [sic] publicly launched a so-called ‘test site’ of their ‘Truth Social’ product, based on the AGPLv3'd Mastodon software platform,” Software Freedom Conservancy policy fellow Brian Kuhn wrote in an official statement. “...However, when you put any site on the Internet licensed under AGPLv3, the AGPLv3 requires that you provide (to every user) an opportunity to receive the entire Corresponding Source for the website based on that code.”

Team Trump, of course, did no such thing. What’s more, his people apparently were trying to pass off Truth Social as proprietary, which is certainly very on-brand for those dillweeds.

30 days to comply — The SFC functions as a watchdog enforcer for free and open-source software licensing, and as such, instructed MAGA Land’s newest grift organization, Trump Media and Technology Group (TMTG), to either make Truth Social’s source code accessible to the public within 30 days (which it won’t do), or design an actual proprietary social media network code (which it also won’t do). If neither outcome occurs within 30 days, the SFC is well within its rights to sue TMTG (which it will).

What next? — So where does Trump Media and Technology Group go from here? There’s honestly a good chance that Truth Social never gets further than its current waiting list signup stage, and it will be swept under the rug along with all the other failed Trump projects. Donald will spout some word vomit about “shadowbanning” and “Big Tech bias” then scrounge ahead looking for his next grift.

Sure, Truth Social could adhere to the SFC’s requests (not to mention legal requirements), but that feels a bit out of character for those guys at this point...