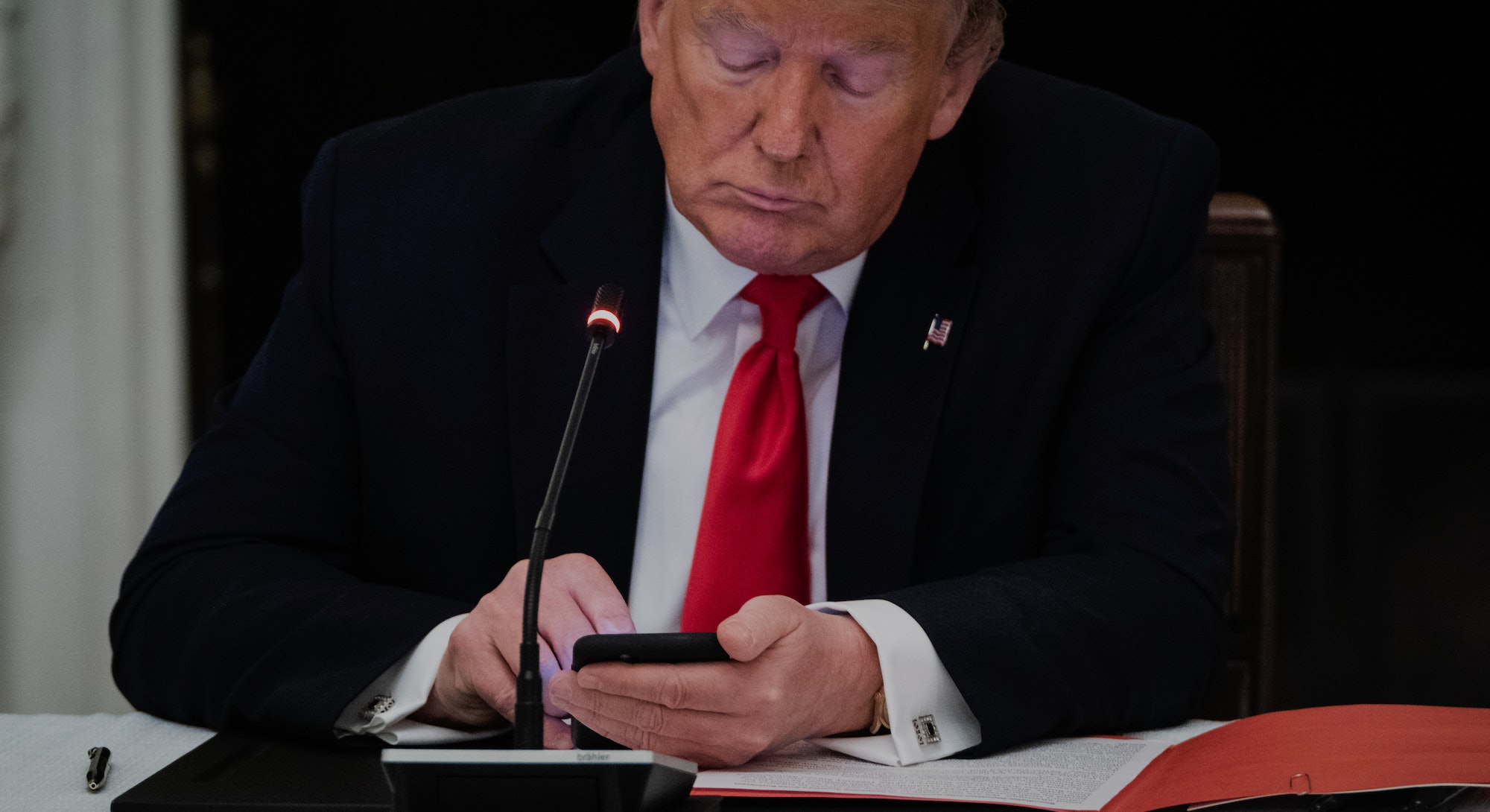 President Donald Trump is obsessed with TikTok, the Chinese-owned social video app that is popular with teens and clout chasers.

With a pandemic raging in America to the tune of 160,000+ dead, an economy on the brink of collapse, and a looming homelessness crisis for 40 million Americans, the president is apparently concerned that an app kids use to lip-sync is a massive national security threat. There is no evidence that TikTok is doing anything more nefarious than Facebook or Snapchat — and it's far from the only Chinese app offered by Google Play and the App Store. Even The White House seems flabbergasted as to why this has become such a focus. So why is Trump so fixated on it? Well, because of something we already knew: He's a narcissist.

The latest company to draw Trump's ire has been the app TikTok and its Chinese parent company ByteDance. Trump has, apparently on the advice of Fox News and his Twitter Reply Guys, decided that the social media start-up is a threat to national security. Let's be clear: Despite bans on the app by major American corporations and government bodies, there has been zero real evidence that TikTok is collecting data any more nefariously than Seamless, YouTube, Facebook, or Pokémon GO. However, critics of TikTok have argued that what makes it different from other popular services is that as a Chinese company it is obligated to share its data with the terrifying Chinese government, which, fair enough! Americans know quite a bit about terrifying government data hoarding.

But following that line of thinking to its logical conclusion wouldn't lead you to believe that TikTok, specifically, needs to be banned. It would lead you to the idea that every Chinese software product needs to be banned. That would include: TikTok, PlayerUnknown's Battlegrounds, WeChat, Overwatch, World of Warcraft, Likee, Helo, Kwai, Weibo, LiveMe, Hearthstone, League of Legends, Fortnite, Grindr, Valorant, Call of Duty Mobile, and more.

Trump's impassioned hatred for the app has instead culminated in a bizarre overreach by the White House. On Monday, the president announced that the app would be banned from the United States unless Microsoft, who has been in talks to acquire the service, or another "very American" company purchased it by September 15. Nonsensically adding that "A very substantial portion of that price is going to have to come into the Treasury of the United States, because we’re making it possible for this deal to happen.” Through what levers he plans to accomplish this unprecedented feat remains unknown.

"This is quite unusual, this is out of the norm," the former Department of Justice Antitrust Division chief counsel and senior adviser to Public Knowledge, Gene Kimmelman, told CNN. "It’s actually quite hard to understand what the president is actually talking about here ... It’s not unheard of for transactions to have broader geopolitical implications between countries, but it’s quite remarkable to think about some kind of money being on the table in connection with a transaction."

Yet despite these grand, hypocritical ambitions for the government to get involved in the ownership of private corporations, all of this is to his, and the nation's, own detriment. "China presents serious security and economic challenges," said Daniel Price, a former economic adviser to President George W. Bush. "But Trump’s erratic oscillation from adoration to demonization has certainly harmed U.S. business interests, and actually diminished our ability to influence China or rally allies to assist in that effort."

Even the White House itself seems bewildered by these developments. "There’s no specific blueprint here," said Larry Kudlow, current White House economic adviser, to Fox Business News. "It may be that the president was thinking, because the Treasury has had to do so much work on this, there are a lot of options here. I’m not sure it’s a specific concept that will be followed through... Regarding fees or anything like that, all that remains to be seen." When asked about the President's obsession, Kayleigh McEnany, the White House's controversial Press Secretary, said during Tuesday's press briefing "Okay, so I’m not going to get ahead of the president on any official action, but he has made that point. And he and both Secretary Pompeo have said that the U.S. action — that the U.S. will take action in the coming days on Chinese apps, including TikTok — TikTok, excuse me, due to the national security risk. And we all agree that there needs to be a change, especially with TikTok collecting significant amounts of private data on users. It’s unacceptable, but I won’t get ahead of the president on what those actions look like." TL;DR she has no idea either.

"I just think the notion that TikTok is the big issue in US-China relations is silliness, and I think it distracts from very important issues," said editor-in-chief of Stanford and New America's DigiChina Project, Graham Webster. Again, TikTok is an app teenagers use to dance and make memes and dads use to announce their sad divorces. What is going on?

What is going on?

So here we go: Remember when Trump planned that huge rally in Tulsa in June, after the pandemic had already been raging, and it was a massive, embarrassing failure? Well, a popular angle on that story at the time was that K-pop fans had organized on TikTok to interfere with the preparation for the event by registering en masse for tickets to attend using dummy email addresses and fake names. This apparently left the Trump campaign expecting a flood of MAGA idiots to pack their stands and, when none showed up, created a very unflattering photo opportunity for our dear reality TV leader. (If this inspires you, pay the fandom back by pre-saving BTS's new single "Dynamite" right now.)

So there it is. That is the core of Trump's issue with TikTok. It really goes no deeper than that. He had no known interaction with, nor opinion on, the dancing and prank app known as TikTok until that development. He is a narcissist who felt slighted by the BTS Army and Blackpink's Blink fandom and decided to use the most powerful nation on earth's significant economic influence to strike back at these... teenagers. Because they don't think he's cool.

"Nobody likes me," he whines, while 160,000+ Americans are dead. That is who the president is and this is the kind of thing that he spends his time and limited attention span on. Please decide if that is what you want for this country on November 4.