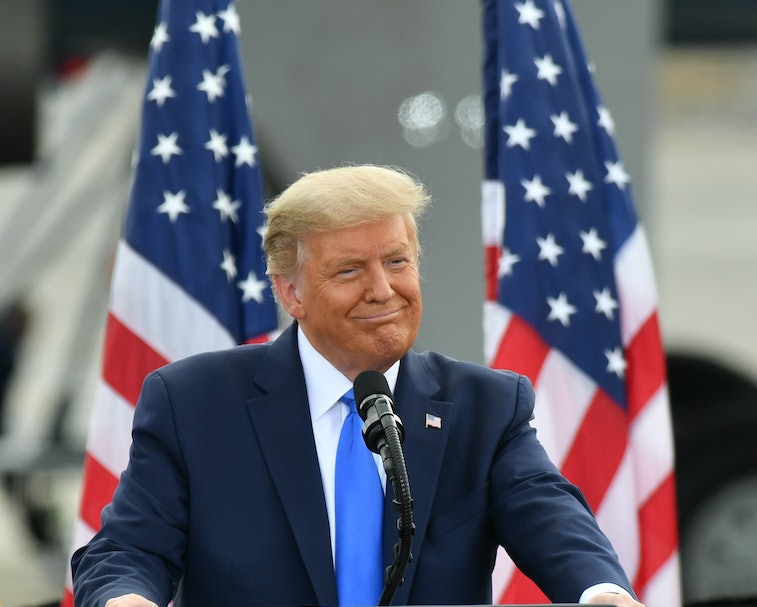 Look, at this stage in the game, there is literally nothing Trump could do to surprise us, apart from maybe a sudden, heartfelt plea of forgiveness for a lifetime's worth of callous, self-centered, sadistic behavior that very well may have helped to hammer the final nails into humanity's coffin. That or voluntarily conceding the forthcoming election to Joe Biden having accepted his actions involving Ukraine were probably unbecoming of, well, anyone.

The closest to "personable" the President gets is possessing some vague sense of humor, but even then, his version of "funny" rests almost completely on the debasement and belittlement of others, so that concession really means nothing. We say all this to preface the following bit of news: Trump thought a satirical news article about Twitter CEO Jack Dorsey smashing a 'Break In Case Of Bad Publicity For Democrats" emergency box was real.

Don't believe everything you read — "Wow, this has never been done in history. This includes his really bad interview last night. Why is Twitter doing this. Bringing more attention to Sleepy Joe & Big T," Trump tweeted at 5:07 in the morning today.

The article comes courtesy of the conservative-edged satirical news site, The Babylon Bee, which describes itself as "the world’s best satire site, totally inerrant in all its truth claims. We write satire about Christian stuff, political stuff, and everyday life."

Blame Biden, obvs — "In a last-ditch effort to stop negative stories about Joe Biden and his family from spreading, Twitter shut down its entire social network Thursday. After seeing account after account tweet out one particularly bad story, CEO Jack Dorsey realized he had to take action," the story reads, referring to both the social media platform's temporary crash yesterday, and the New York Post's dubious exposé published earlier this week on Biden's son, Hunter. Both Twitter and Facebook made the controversial decision to limit the spread of the article in question, citing doubts about the source materials and how they were acquired.

The man cannot take, or make, a joke— Because it's clear by now that Trump never reads more than he has to, let alone for his own education or relaxation, we expect the retweet occurred simply because the Cretin-in-Chief saw the headline and knee-jerk shared the piece because it validated his worldview that he's great and awesome (and totally not a racist) and everybody's just out to get him. For further examples of this unfounded persecution complex, please see here, and here, and of course, here.

Whatever the reason, Trump has yet to delete his endorsement of the (again, we cannot stress this enough) explicitly satirical article, or issue a follow-up to suggest that he's in on the joke. Which would be a perfectly Trumpian lie, and very on-brand. For further hints the article is satire, it concludes with Dorsey and fellow Twitter employees building a robot to lift a big sledgehammer, the implication being they're all too nerdy and weak to perform any manual labor.

"After hearing the Twitter employees talk about critical theory, the robot got woke and began attacking all the cis white males," the piece ends. Oh, how very droll. Of course, you only find that out if you read till the end, though.