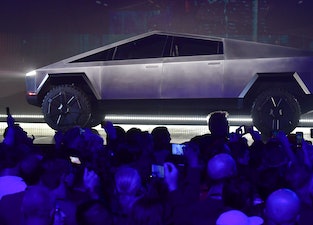 How many people have laid down $100 to reserve a Cybertruck.

Whatever your thoughts on Elon Musk, Tesla’s Cybertruck is cool and exciting. Enthusiasm for the vehicle is reflected in the massive public interest it's enjoyed, with approximately 650,000 pre-orders now recorded, according to Finbold. That surpasses the 612,120 deliveries the company made throughout 2018 and 2019. Which, when you think about it, is pretty insane. But insane is to be expected from a company that managed to make 23 times fewer cars than Toyota but still beat is to the top of the list of most-valuable carmakers on earth.

With Tesla’s production capabilities improving each year, and multiple new factories slated to open this year and next, it looks like it will be able to meet the substantial demand for its futuristic truck, too.

Back in February, the Cybertruck had already seen more than 535,000 pre-orders. While getting roughly another 100,000 orders since then might not seem impressive, consider how many people put up $100 amid unprecedented health and financial crises. Who doesn’t want to be one of the first people to drive the unofficial vehicle of the upcoming interstellar class war?

Belle of the ball — As we reported months ago, a pre-order might not translate into a sale, but it’s still a great marker of public interest. There's so much hype surrounding Tesla's first pick-up, that petitions from fans have even seen toymaker Hot Wheels roll out two, remote-controlled Cybertrucks for the holidays.

Tesla can meet the demand — Tesla deliveries have increased exponentially since 2016, according to data gathered by Finbold. The automaker is hitting its stride and shows no signs of slowing down. Musk is hell-bent on keeping Tesla on track to have made 1.5 million cars by the year’s end and to start shipping Cybertrucks next year. It's going to have to work out a few kinks with the quality control issues that have been plaguing the Model Y, but Tesla fans are a forgiving bunch, so we don't expect those worries to dampen demand for the Cybertruck.

Considering Musk's massive paydays are tied directly to hitting certain benchmarks, we can almost understand his enthusiasm for output outweighing practicalities like quality control. Unfortunately, production speed and quality don’t go hand-in-hand, though, so the company could stand to slow down a bit. With the Cybertruck likely needing a totally different production line, hopefully the lessons learned from the Model Y will carry over to it. After all, it's a vehicle that could upend a whole market segment, and pave the way for other all-electric trucks like those coming out of rival Rivian.