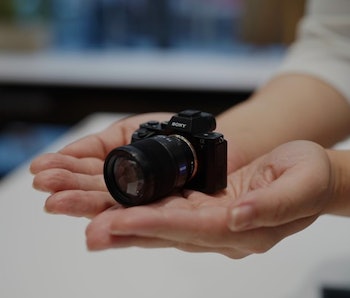 Attention, shutterbugs! Sony Japan has quite the deal for you. According to PetaPixel, the company has announced that if you make a purchase for a brand new a7 or a9, you will also get a little gift on the side: a miniature camera kit. And if not that, a lens. The outlet reports that if the special promotion applies to you, you can choose between either an a7R II plus 24-70mm kit or a 100-400mm GM lens.

You'll have to travel a fair deal though, as the offer applies to certain parts of Japan only, including Fukuoka, Osaka, Sapporo, and Ginza.

a7 or a9, this is A+ — Sony's a7 boasts a 24.3 MP CMOS sensor with the ability to stabilize. It also has hybrid-phase and contrast autofocus. The a7 also comes with an electronic front shutter curtain and, if you want to keep it hush-hush while capturing the moment, a shutter mode in the quiet setting. The burst rates are relatively faster, too, at 5 fps instead of 4 fps.

With the Sony a9, which was called the camera of 2018, you will have the chance to use camera gear that often covers weddings, action shots, and other high-level photography events. It's a full-frame mirrorless camera with full autofocus, 20 frame per second, and the best part is that it has no blackout between back to back shots. No one likes the lag so Sony took it out. Both a7 and a9 pack great strengths, speeds, readouts, and image quality. It's for the ambitious photographer but also anyone who wants to get into photography on a more serious and detail-oriented level.

While it sounds like an excellent offer — Sony's photography gear continues to impress, after all — it won't stay in effect forever. The Sony deal runs through the month of November. Sure, you have to be in certain parts of Japan to take advantage of the deal and you only have a month before it's gone but if you're in town, got the cash, and the drive for photography, why not check it out? We're all for it.