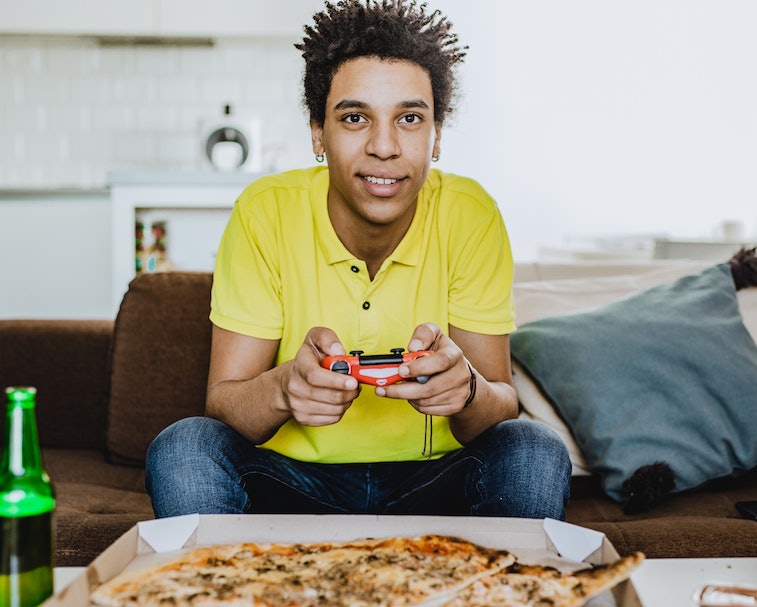 See that stock image above of a guy playing a video game? Looks fine, right? The picture seems to adequately conveys a certain mood and scene: that of a man enjoying some downtime, with a pretty tasty-looking pizza and beer in front of him for good measure. There’s really no need to change much if you wanted to license it for advertising, then Photoshop in a somewhat ridiculous, wearable gaming speaker system that wraps around your neck, right?

... Hmm. Correct us if we’re wrong here, but it certainly seems as though Panasonic Photoshopped the African American model’s body, stuck some random white dude’s head on top of it, then lightened the image contrast to match the latter’s pasty skin tone.

Surely that can’t be the case, though, because that would be a ridiculous, oddly unnecessary, racist decision that surely would result in an audience backlash and immediate removal of said advertisement... Oh, that’s exactly what happened? Well, we stand corrected. With our heads resting in our hands out of sheer exhaustion.

Your eyes, unfortunately, do not deceive you — As a recent, amusingly exhaustive deep-dive into Panasonic’s completely avoidable fiasco courtesy of The Verge proves, the electronics company 100 percent pulled the surreal, racial switcheroo on consumers recently. On top of having exactly the same shirt, creases, and arm angles, the photo’s EXIF info actually still reads, “Young African American man eating pizza, drinking beer and playing video games.” Hell, we were able to find it immediately in our own Getty Images search, too.

What makes matters even stranger is the fact that, as of right now, no one can seem to figure out the source of the white man’s head. It’s most likely from a similar stock photo, but with no other descriptors to go on, it’s a little difficult to pinpoint “generic white dude.”

Good luck finding the ads now — Thankfully, the realization and subsequent outing have apparently resulted in Panasonic scrubbing the ads from its SoundSlayer campaign. After being reached for contact by The Verge, Panasonic “pulled every promo image featuring a human being from its image distribution folder for this product” and said it is still looking into the issue.

At the end of the day, though, it’s clear the company most certainly paid somebody real dollars to literally whitewash stock photos for an ad campaign. Yikes.