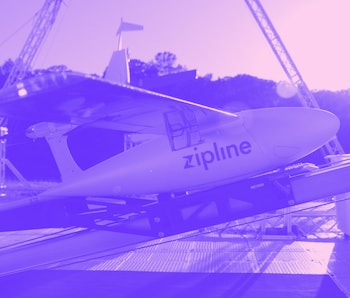 The slow crawl (or flight, we suppose) towards mainstream drone deliveries took another step forward today, as Walmart announced its partnership with the medical supply company, Zipline, to begin its own aerial services next year. What's more, the trial is set to test out a one-hour-or-less delivery window.

Medical supplies delivered in under an hour — The big box giant first announced its plans to begin work on drone delivery services back in 2015, but this is the corporation's biggest step yet towards the widespread implementation of an increasingly crowded, competitive field. According to a press release posted today on Walmart's site, the promise that sets its drone delivery apart from companies', like Amazon's, is a supposed one-hour-or-less window from the moment of ordering. The initial testing will commence near Walmart's headquarters in Bentonville, Arkansas, and will cover a 50-mile square radius—roughly the same size as the state of Connecticut, as pointed out in the statement.

Walmart's drone delivery beta tests will be made possible through its collaboration with Zipline, a San Francisco-based company that has so far mainly focused on medical supply deliveries in Rwanda and Ghana. Zipline began its operations in Africa back in 2016, mainly providing blood, plasma, and similar needs near its distribution centers. In 2018, the company introduced a second-generation, electric drone model that can reach speeds nearing 80 MPH, and recently passed the milestone of its 200,000th delivery. Zipline now operates the world's largest drone service, and it's this quickness and geographical reach that Walmart is apparently banking on for its own upcoming deliveries.

Entering a crowded field — Walmart's first trials will keep in line with Zipline's existing products, parachuting in health and wellness purchases to customers starting in early 2021. If successful, the retailer will then expand to more general items, and in more locations around the country. The PR statement also notes that the drone deliveries will ease the company's carbon emissions, which given, y'know, literally everything going on in the world, is definitely a good thing.

Walmart's announcement comes on the heels of the news that Amazon recently secured a crucial FAA approval certificate, allowing its own drone tests to commence soon. Back in June, Zipline also partnered with Novant Health to begin delivering medical supplies to frontline health professionals working through the COVID-19 pandemic. Speaking of historic pandemics, the virus has meant Google's parent company, Alphabet, is also doing just gangbusters with its own drone delivery service, Wing. Suffice to say, Walmart is entering into a very competitive and fast-moving field that shows no signs of slowing down anytime soon.