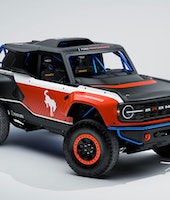 The estimated price for a 2022 Ford Bronco DR.

Ford Motor Company finally brought back the Bronco to quite a lot of fanfare last year, and it was pretty easy to see why — the newest spin on the iconic model is a great merging of old-school familiarity and futuristic sheen, not to mention the all-but-certain promise of both hybrid and all-electric iterations to come. It’s hard to pick which version we like best, but a new contender recently drove onto the track, and it is a badass. Say hello to the (extremely expensive) Bronco Desert Racer:

Race-ready, with a price tag to match — The Bronco DR will make its debut next year at the SCORE Baja 1000, one of the most famous off-road racing circuits in the world, and according to Ford’s announcement, it’s coming in hot. Featuring a Ford Coyote 5.0-liter V8 engine that can generate over 400 hp and the Bronco’s trademark High-Performance Off-Road Stability Suspension (H.O.S.S.) system, the Desert Racer edition also includes Positional Selective DSSV Dampers with 80-millimeter bodies with finned fluid cooling channels, as well as Multimatic-designed billet aluminum lower control arms.

All that intensity comes at a matching price, though. While the details aren’t known yet, Ford estimates the starting price for one of these beasts will be somewhere in the mid-$200,000 range. On top of that, only 50 will be initially produced next year before wider pre-orders are accepted.

Honoring the Bronco’s legacy — The Ford Bronco DR is made with the past in mind. Back in 1969, the first-generation Bronco pulled off the only outright win by a 4x4 vehicle ever in the Baja 1000. Now, the DR aims to pull off similar feats right off the factory floor. “Its entire purpose is to compete in world-class off-road competitions,” reads the official press release, with Mark Rushbrook, Ford Performance Motorsports global director, adding that the DR is a ground-up build.

“At the heart of what we did here was capture the enthusiasm surrounding Bronco, and then build on it by creating a desert racer that is competition-ready coming out of the factory – something Ford has never done before,” explains Rushbrook.

Personally, we can’t wait to see these things in action next year, even if it’s unlikely we’ll ever be behind the wheel.