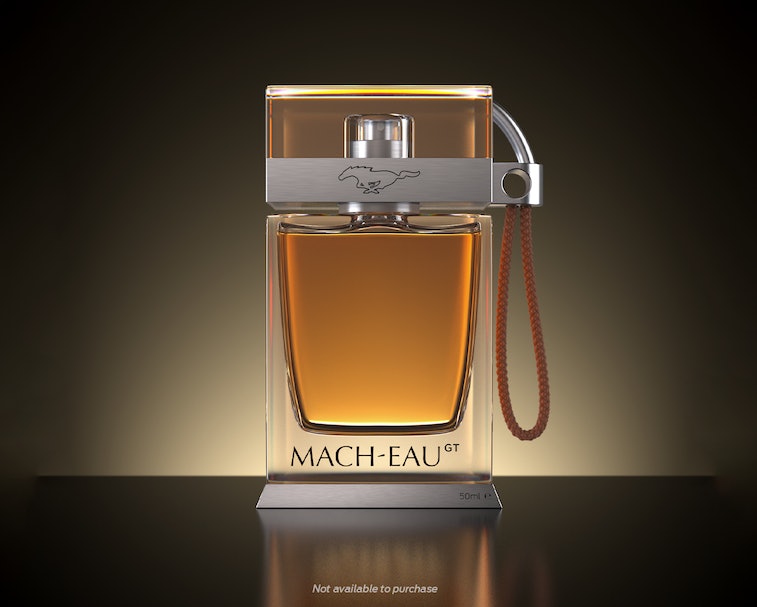 Some people love the smell of gasoline. It’s weird, honestly, but hey, to each their own. To celebrate the launch of the new, all-electric Mustang Mach-E GT, Ford teamed up with the perfumers at Olfiction to create a one-of-a-kind fragrance that pays homage to the fossil fuel that got us to our current hell world: gasoline.

Last weekend, Ford unveiled Mach-Eau, (“macho,” get it?) a not-for-sale cologne meant for those who “hold a fondness for the evocative smells of traditional petrol cars.” The debut came during the annual Goodwood Festival of Speed, an annual event in the U.K. that “attracts petrolheads from around the globe.”

Ford says the release is part of its “ongoing mission to help dispel myths around electric cars and convince traditional car enthusiasts of the potential of electric vehicles.” We’re not sure how a fake perfume that smells like burning tires will help with that project, but okay, sure. It’s a pretty dope bottle, though, we have to admit.

Let’s look under the hood — To create the concoction, Olfiction’s Pia Long researched the chemicals emitted from car interiors, gas, and engines — most notably benzaldehyde, an “almond-like scent” given off by interiors, and para-cresol, which is responsible for tires’ rubbery smell.

Other, less off-putting ingredients apparently include blue ginger, lavender, geranium, and sandalwood, as well as “an overdose” of Timut pepper. “An ‘animal’ element was also included, to create an impression of horses and underline the Mustang heritage,” Olfiction adds, for those who have ever tested out a perfume and thought, “This could use more horse manure.”

At least the car is pretty great — Don’t let the surreal marketing gimmick courtesy of Ford fool you, though: the Mach-E is most assuredly a pretty badass ride. Own our Craig Wilson took a spin in one recently, and described the experience as “an excellent, polished, fun-to-drive car that offers great value for money and an attractive alternative to the big name in electric vehicles.”

We also think it’s the first serious competitor for Tesla’s Model Y, which is an added bonus since it’s never a bad thing to put some extra heat on the Technoking. We’re all for more EVs options on the road, less so for their accompanying perfumes.