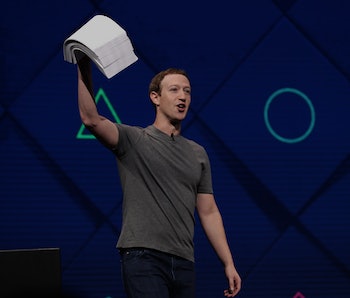 Less than a week after it started blocking all news in Australia, Facebook has decided to reverse the ban and restore news pages and posts to the site. The social media giant has reached an agreement with the Australian government that Facebook says will allow it to maintain firm control over what appears on its platform.

Facebook says news will be coming back to Australian feeds in “the coming days.” The company has not yet made an official announcement on its blog about the deal.

For a few blessed days, Australian Facebook users found themselves back in the idyllic Facebook of yore, free to browse family photos and friends’ saccharine engagement announcements without news of the world clamoring for their attention. As is too often the case, that brief peace was too good to last. That’s what happens when you make rash decisions to save your profits.

Facebook gets what it wants — Facebook originally shut down news posts on the network as a response to newly passed legislation that would have forced the company to pay publishers for their content. Rather than simply doing so, Facebook removed itself from the equation, as it had been threatening to do for months.

Apparently doing so put enough pressure on the Australian government that it forced it to renegotiate the terms of the planned legislation. The new amendments allow for far more negotiation on the side of tech companies like Facebook and Google, with official arbitration becoming a last-resort measure if a deal cannot be reached. These amendments give tech companies much more wiggle room.

Campbell Brown, Facebook’s VP for global news partnerships, said in a statement that Facebook will retain the ability to shut down news on Facebook again so the company won’t be subject to forced renegotiations down the road. She added the new amendments will allow Facebook to “support the publishers we choose to, including small and local publishers.”

All about money and power — Facebook’s favorite talking points center on allowing free speech to prosper across its platforms. In the United States, in particular, the company has repeatedly allowed misinformation and conspiracies to thrive under the guise of “free speech” — but the moment its profits are threatened, as in this case in Australia, the company has no problem pulling content.

Ethics are not Facebook’s priority — making money is. The company has no qualms with fudging numbers or taking extreme measures in an effort to protect its bottom line.