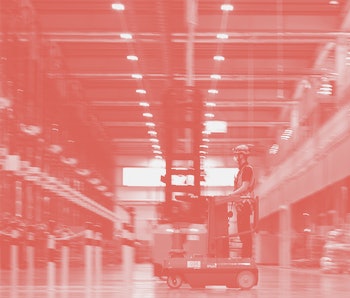 Today in cursed news: Amazon has ceased construction on a new Connecticut warehouse after workers found nooses hanging from various steel beams. Seven lengths of rope “that could be interpreted as nooses” were found on several different floors of the in-progress building, according to a report from USA Today.

Police in Windsor, Connecticut were first alerted to a noose at the site on April 27; five more were found two days later. Amazon decided to shut down the construction site after a seventh noose was found this week. Some of the ropes were twisted to look more explicitly like nooses than others, police report.

The Greater Hartford chapter of the NAACP has also been involved in the case.

“We continue to be deeply disturbed the incidents at this construction site,” NAACP spokesperson Brian Griggs said at a news conference. “Hate, racism, or discrimination have no place in our society and are certainly not tolerated in any Amazon workplace — whether it be under construction like this one, or fully operational.” He added that the chapter is working alongside local law enforcement to “find and hold accountable the perpetrators of these incidents.”

Not the first time — Finding seven nooses, sloppy or otherwise, on a construction site sends a clear message. And it’s actually one Amazon has received before.

Just about a year ago, an Amazon worker in Arizona found piece of rope tied into the shape of a noose — this time in an active warehouse facility. The worker who found the rope felt unsafe enough that she left the warehouse job. She also told local news sources at the time that she felt like Amazon was treating her “like a nobody” and not taking the incident seriously.

Some context — This time around Amazon does seem to be taking the nooses more seriously; the company is now offering a $100,000 reward to anyone with information about the person or persons who tied the knots.

That increased attention could be linked to pressure Amazon is facing elsewhere to address race and gender discrimination across the company. At least five women have filed lawsuits against Amazon in the recent past, all citing racial and gender discrimination in their various roles. Two of the women are Black; the others are white, Latinx, and Asian-American, according to USA Today.

The NAACP says the Windsor construction site will be shut down “until necessary security measures have been put in place.” It’s unclear why security cameras and other baseline security measures weren’t already implemented at the site. Seems like tech companies are just generally bad with physical security.