“The claim of anti-conservative animus is itself a form of disinformation: a falsehood with no reliable evidence to support it.” 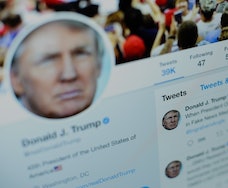 None of this is news to anyone who's used social media since 2016, when former President Trump's upset election woke up Democrats to the possibility that social media services were being abused to spread misinformation and influence the electorate. But having it laid down in black and white from a respectable institution certainly helps in the face of some Republican's incessant cries of "fake news!"

Losing battle — Any attempt to clamp down on harmful misinformation by Facebook and Twitter is immediately called censorship by conservatives, even while right-leaning content remains by far the most popular on Facebook, a fact the company has demonstrated over and over again.

Crying foul is an effective strategy, as social media platforms want to be seen as neutral town squares, and don't want to scare off investors. Mark Zuckerberg and Jack Dorsey hopelessly tried to appease Trump and the GOP over the past four years because of this, but eventually had to concede that perhaps hosting falsehoods and amplifying baseless outrage might erode democracy, not strengthen it.

"The claim of anti-conservative animus is itself a form of disinformation: a falsehood with no reliable evidence to support it,” reads the report. “Trump has been the leading purveyor of the bias accusation, but it will not recede with the end of his presidency.”

Trump was booted from Twitter and Facebook following riots at the U.S. Capitol that anyone who watched his tragic public utterances on the day will agree he helped instigate. The social networks would say a line in the sand was crossed, but more likely, they realized it was prudent to change tack when it was clear a Democratic-controlled House and Senate were on the way, and they aren't likely to simply let Big Tech companies get away Scot-free after years of mistakes.

Suggestions — The study's authors conclude with suggestions on how to move forward. One idea is that Washington D.C. and Silicon Valley should repair their relationship under President Biden and work together to draft new regulations regarding social media moderation. That's a suggestion that Facebook and Twitter's CEOs have both made — that it would be better for the public to decide what is or isn't allowed, rather than leaving it up to two monolithic companies. But of course, that's also the companies looking to shirk editorial responsibility for the content they host.

The report also suggests establishing a new, federal Digital Regulatory Agency. It's hard to imagine how regulation could meaningfully tackle misinformation or hate speech running rampant on social media without social media's buy-in. Perhaps the argument lies in punitive measures. Because Big Tech only responds when the contents of its pockets are threatened.