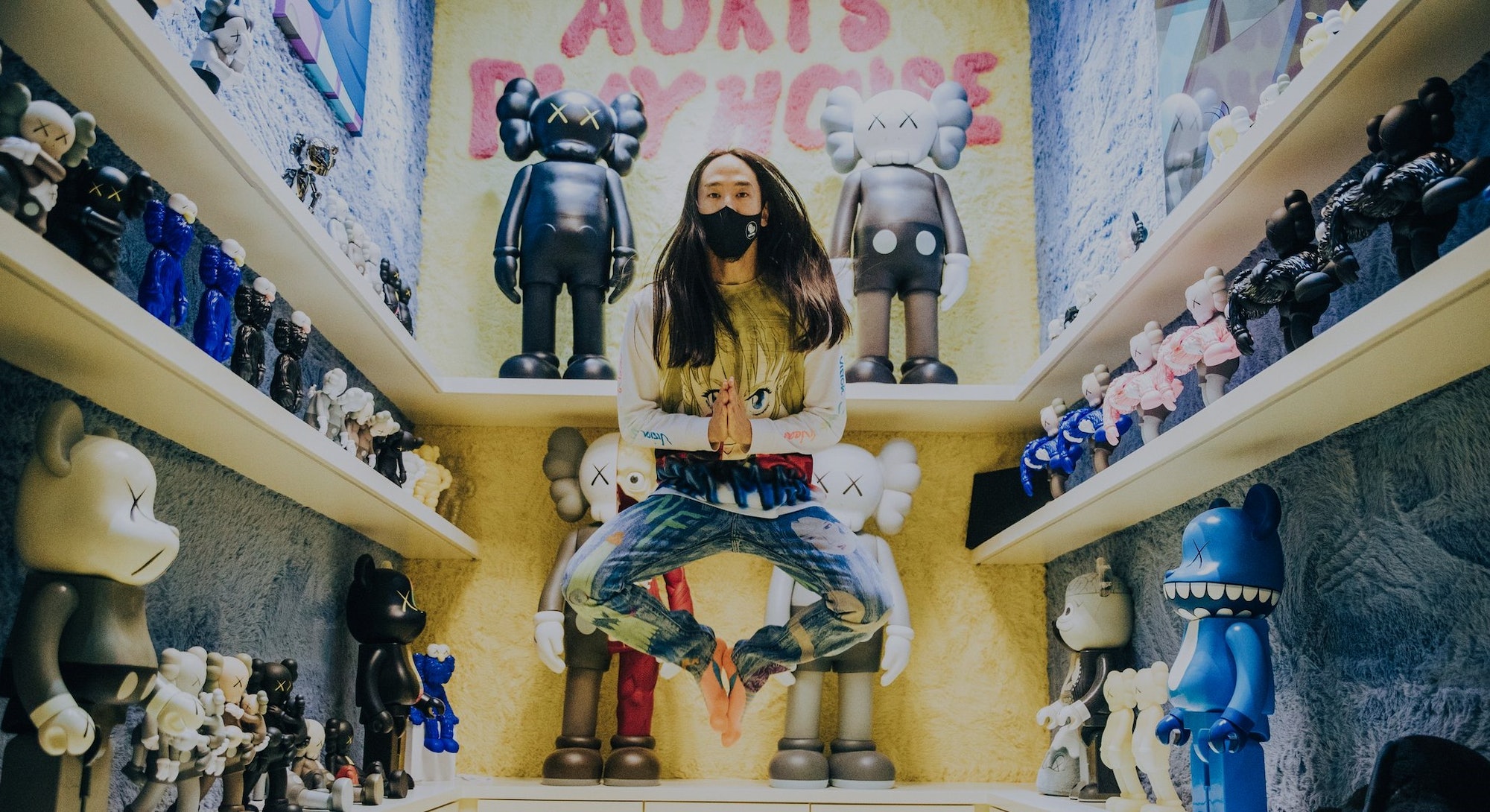 The world-famous electronic musician Steve Aoki hasn’t had this much time off the road in a decade and a half. But the 42-year-old DJ, who’s sheltering in place with his “quarantine crew” at his home in Las Vegas, is as busy as ever.

“My life is extremely structured,” says Aoki, who released his sixth studio album, Neon Future IV, in early April. "I just fill out my days with tons and tons of activities, a lot to do with connectivity." During lockdown, he has been doing all manner of online programming, including a Neon Future Dinner Party series, Mindfulness Marathon talks, and DJ sets.

Over the course of seven days in May, Input checked in with Aoki to see how he’s dealing with life in quarantine.

The last 15 years, I was touring 250 shows a year consecutively. I never, never slowed down. And then we had to stop. I think one of the most important things I did was talk with my team during that time of stress, and think outside the box.

I stack out my week pretty heavy. Today, I have two things going on. I have an ongoing series called Neon Future Dinner Party. I reached out to the GOATs in the surf/skate/snow world. So today I’m going to have a talk with Tony Hawk, Shaun White, and Kelly Slater. I grew up surfing, skateboarding, and snowboarding, so young Steve Aoki is definitely doing backflips right now.

I’m also starting a new talk called the Mindfulness Marathon. I have a foundation called the Aoki Foundation, which raises money and creates dialogue specifically about the human brain. The Mindfulness Marathon is about how to deal with our mental health, how to increase our well-being during COVID. I’m talking with eight different experts in eight different fields to help people deal with being cooped up in their homes. Later today, I’m talking to Jim Kwik, who’s a memory expert and just wrote a book called Limitless, which is incredible.

I’ve been in my house in Las Vegas since they shut everything down. I have a quarantine crew in my house — people who are kind of staying here with me. And then my mom, and my sister and her daughter live just down the street. So we meet up all the time. We’re always together.

Yesterday, for the Mindfulness Marathon, I talked with Cesar Milan, on human-to-animal connectivity and how important that is and how to really get better at it. Later today, I am going to be talking with Andy Puddicombe, one of the founders of Headspace, about meditation.

Then I have my [online] chess lessons, and later [FaceTime] piano lessons. And I have [home] studio time tonight. I’m working on finishing up this project. I’m not sure when it's going to come out. There's no timeline. This is not a Steve Aoki project, this is something else.

My downtime would be playing games. Like when I’m done at 11 p.m.-ish, I’ll jump on and play some Call of Duty, and that’s zone-out time, for sure. Hundred percent zone-out.

I’m going to be DJing this virtual prom. So we’re setting that whole thing up. I’ve never DJ’d a prom in my life. Nor did I ever think that I would. These [high school] kids, they’re going to have a great time. What does that look like? I’m not entirely sure. It’s just unfortunate, man. It’s unfortunate, that something like a prom, which is really monumental in kids’ lives, can’t happen right now. So at least we can do this, you know?

I’ve been watching this show called Upload. Love my sci-fi. Later on, I’m going to do a little workout and then do some more live content in the house and then have some dinner, possibly do a cold plunge. And then breath work and then maybe catch up on that show and go back down to the studio. Nowadays the studio is great because of the feeling of freedom to just experiment and toy with sounds. Because usually when I’m in the studio, I’m like, “Okay, I have to get this done, this done, this done.”

I started my day doing the cold plunge. Basically, I fill that tub with ice and water. It’s about 34 or 35 degrees. And you sit in there. You learn how to control your mind, to deal with situations that you think you can’t control. It’s healthy to shock your body like that. I leave really excited, really inspired. It gets me going through the day.

This weekend? Sunday I have to do a DJ set for UC Santa Barbara, my alma mater. It’s unfortunately not on campus, and it’s virtual. This is a time when I’m usually touring and playing colleges. I miss touring a lot. It’s what I know. You couldn’t have predicted something like this to ever happen. I thought I’ll be touring for at least 10 more years, minimum.

So you make the most of what you can do. When I see a camera filming me, I think about how many people are watching, and I imagine that there’s this big crowd in front of me through the camera lens. That’s just the way life is now.

Saturday was a very long day, 8 a.m. to 4 a.m. And then Sunday I woke up at about 11 and did IG Live with [sportscaster] Kenny Smith. He interviewed Reggie Miller, Chris Tucker, and me. It was really interesting watching his IG live with Reggie Miller because they’re just talking about The Last Dance and what it’s like to play with Michael Jordan.

Later on, I did my DJ set for UCSB and a Q&A for them. They’re asking me what places I used to frequent. I was part of the anime club. I was politically active on campus – part of the student government. Just talking about living in Isla Vista, putting on shows in my living room. There were a lot of fun Memory Lane kind of questions. So that was really cool.

I just did a quick Zoom with my team, and we’re going over the next Neon Future Dinner. This is AAPI Month – we’re celebrating Asian American Pacific Islander Month in May. So, this next episode of Neon Future Dinner will be all about that. We’re bringing on [actor] Henry Golding, [actor] Ross Butler, [beauty YouTuber] Michelle Phan, and [television journalist] Lisa Ling.

I mean, I’m celebrating AAPI Month every month. I’m an Asian-American. I’m Japanese; I was born here. And to be honest with you, I didn’t really have that many role models who were Asians. I looked up to Bruce Lee – he was like the only Asian role model I had outside of my father or my family. And he was, like, dead. There are just not that many Asian role models out there, even now. So that conversation is going to be interesting, especially during COVID, where racism has exploded against Asian-Americans.

Do I consider myself a role model for other Asians? If someone wants to call me a role model to them, yes. But I don’t wake up and say, “I’m a role model.”

I did a DJ set yesterday for this nightclub in China. I guess they’re opening up nightclubs out there. So they’re putting me on the screen, and I did a virtual DJ set for them. And I did my last Mindfulness Marathon interview with the sleep doctor Michael Breus. He talks about sleep and the benefits and the importance of sleep.

I’m really happy about all these different things I’m learning during COVID. I’m learning a lot about myself being at home – it’s a different kind of me. I know that we’ll be able to do shows again. I think the next kind of shows I'll be doing are car shows, like a drive-in.

These car things are pretty interesting because you could still be entertained, still be part of your music community. And music is an international language. It’s a powerful language. It’s a language filled with love and energy, and it’s got this infinite power. It’s going to bring people together. And as long as we’re safe and we’re together, I think we’ll be alright.