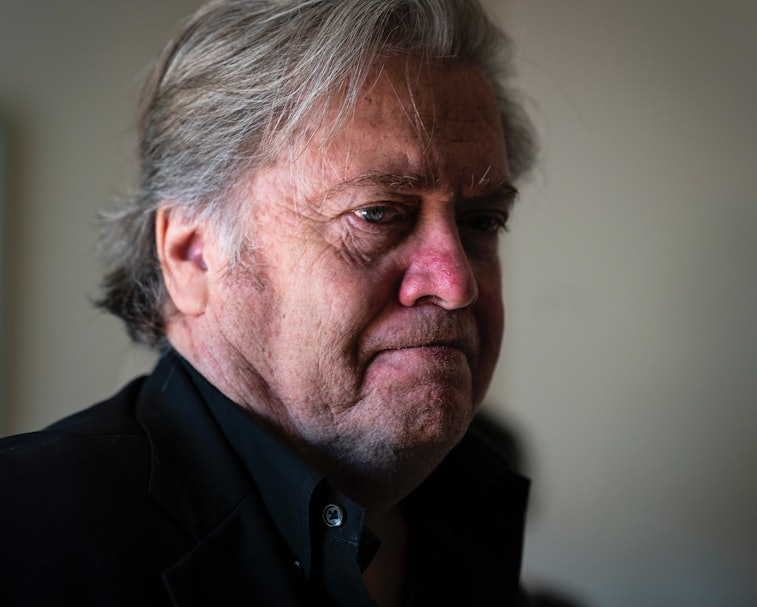 Crackpot — This comes after the former adviser to President Trump suggested in a video last week that FBI Director Christopher Wray and infectious diseases expert Anthony Fauci should be beheaded for being disloyal to the president. About Fauci, he thinks this is deserved because "we can't really have Thanksgiving" if following his advice against gathering during the coronavirus pandemic. "I'd actually like to go back to the old times of Tudor England, I'd like to put their heads on pikes. I'd put them at the two corners of the White House as a warning."

Facebook removed the video but left up Bannon's page, and the company has been unwilling to comment publicly on the situation. But employees frequently use all-hands meetings to push back on content moderation decisions.

“We have specific rules around how many times you need to violate certain policies before we will deactivate your account completely,” Zuckerberg told staff, according to Reuters. “While the offenses here, I think, came close to crossing that line, they clearly did not cross the line.” It really makes you wonder what would be enough to cross the line.

Policies shmolicies — The comments by Zuckerberg are emblematic of greater problems at Facebook. Many employees have lost faith that the social network can have a positive impact on the world, in part because Zuckerberg finds ways to justify any decision that's politically expedient even if it contradicts the company's own policies. Previously, employees "walked out" after he personally reviewed and allowed a post from President Trump to remain live that suggested protestors should be shot.

Zuckerberg frequently says he wants Facebook to be a platform for open speech. Critics argue that violent and dangerous content does the opposite by silencing vulnerable populations.

Zuckerberg has found ways to silence even the critics inside his own company, however: banning internal discussion of politics, effectively putting his hands over his ears so he doesn't have to hear it.

Having values works — Twitter banned Bannon last week over the video and more broadly has been much more aggressive about policing political content around the election. Over the weekend when the presidential election was called for Joe Biden, Trump's account became blanketed with warning messages that hid the content of his tweets.

You don't hear much about employees protesting over at Twitter. That's a nice thing about being a smaller company and owning it rather than trying to host everyone and dominate.

Maybe the real issue is that employees joined Facebook expecting it to follow its stated values and their dissent is a response to try and fix what they see is broken. If he doesn't want to deal with it, Zuckerberg could always just quit and move over for someone who's more willing to navigate these complex issues.