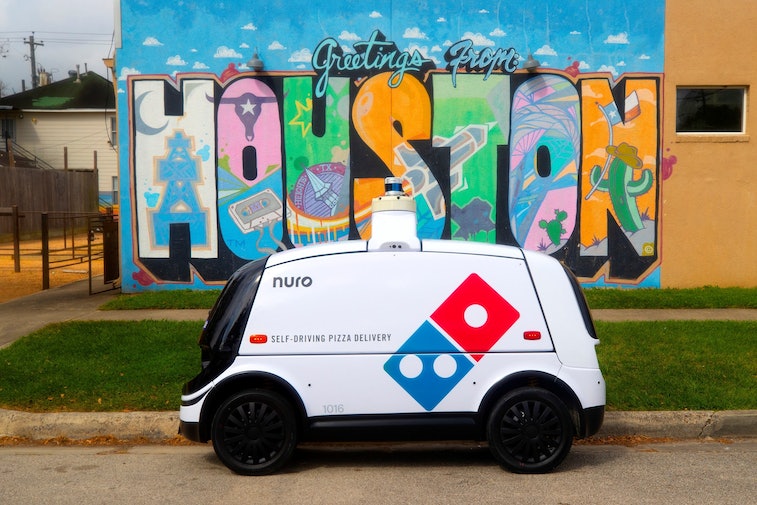 The speed with which your hot Dominos pizza makes it to your doorstep could now be in the hands of a robot. The company is piloting an autonomous delivery program in Houston, Texas, with assistance from Nuro’s R2 robot. The collaboration, which has been in the works for more than two years, is very limited in scope right now; only some prepaid orders in Houston will present users with the option to have their meal delivered via Nuro’s R2.

Dennis Maloney, a senior VP at Domino’s, said in statement that the company is very excited to innovate — and that the journey to fully automated delivery is far from complete. “This program will allow us to better understand how customers respond to the deliveries, how they interact with the robot and how it affects store operations,” Maloney says.

Utilizing the autonomous delivery service is as easy as opting in during checkout on the Domino’s site (if you live in Houston, of course). You’ll be able to watch as the R2 drives itself through the streets of Woodland Heights to reach your driveway; once it arrives, you can release the pizza by entering a PIN on the robot’s touchscreen. At that point, the company says, “R2’s doors will then gently open, revealing the customer’s hot Domino’s order.”

The R2 is big news — This is exciting for Domino’s, but, more largely, it’s a big test for the future of delivery vehicles. Autonomous vehicles have been in development for a very long time now, but it’s only very recently that companies have been given the go-ahead to let their vehicles leave the nest on their own.

Nuro only received that coveted government clearance last month for the R2, which is the second generation of the company’s toaster-looking vehicle. As Input editor Craig Wilson explains, this is precedent-setting — it’s the first time the U.S. Department of Transportation and the National Highway Traffic Safety Administration have allowed for such a regulatory exemption. This was easier to come by given that the R2 doesn’t carry any human passengers.

A long way from the norm — In the vast majority of locations, a human delivery driver will still be handing over your piping hot pizza. Nuro’s regulatory exemption is only good for Houston at the moment, and, given the many safety concerns around such technology, it will be a while before we see the R2 popping up across the rest of the United States.

Still, this trial will be telling for Domino’s. Will the R2 cut down on overhead and shorten delivery times? Will customers even choose to use the autonomous option, if given the choice? Perhaps the answer will be no — in which case those of us outside Houston may never see the R2 at all.