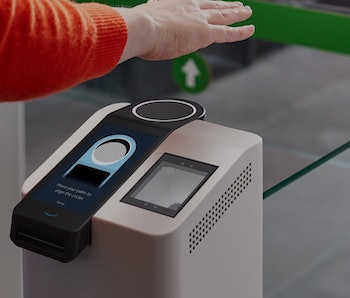 Amazon is today introducing a new service called Amazon One that lets shoppers pay at stores with just their hands. Because, apparently, the tech behemoth doesn't already own enough of our personal information.

The biometric scanning device is launching at just two Amazon brick-and-mortar stores in Seattle, Washington today, but it’s expected to spread to all of Amazon’s Go stores in the near future. Amazon hopes it’ll someday be put to use in other stores, too — hence the patent it filed last year for the technology.

The new technology brings with it a slew of privacy questions. How comfortable are you with the idea of Amazon holding onto some of your biometric data?

Scan the hand and go — Setup is simple: just scan your hand and insert your card at the terminal. Your payment information will be stored along with your biometric data on an Amazon server somewhere. Next time you visit the store you can just wave your hand over the terminal and walk out with your groceries.

Amazon Vice President Dilip Kumar says Amazon chose to use palm-scanning because it’s considered more private. “You can’t determine a person’s identity by looking at an image of their palm,” he writes in today’s announcement. He also mentions that, as a contactless payment method, palm scanning is perfect for our current pandemic-stricken reality.

Coming to a Whole Foods near you — As always, Amazon’s latest technology has moonshot dreams. Though hand scanners are only launching in two Amazon Go stores right now — and other Amazon stores in “the coming months” — the company is pushing hard for other retailers to, umm, try their hand at it.

Amazon says it’s already in “active discussions” with several potential customers for the biometric scanner. We’d put some money on the technology coming to Amazon-owned Whole Foods in the not-too-distant future.

Privacy? What’s that? — Amazon’s largest hurdle moving forward with this technology will undoubtedly be its adoption rate. It’s never easy to convince people to hand over their biometric data, even when doing so means easy-breezy contactless payments.

To this effect, Amazon has already taken a defensive position. In its announcement of the tech, Amazon dedicates a few solid paragraphs to privacy. Yes, you’ll be able to delete the biometric data at any time; no, you won’t be required to link it to an Amazon account; yes, the device is “highly secure.”

Still, you'll need to be comfortable knowing your handprint is saved to servers belonging to a company that loves surveillance. Amazon says it “has no plans to use transaction information from third party locations for Amazon advertising or other purposes,” but that doesn’t mean that will always be the case.

But then again, we said the same thing about Apple’s fingerprint sensors and Face ID when they were first introduced, and now they’re very much the norm. Amazon is taking a leap of faith by creating and marketing this technology — but it’s one that could very well pay off if customers enjoy how easy it is to use. It could even license the tech to other companies, and perhaps one day we could forgo Metrocards or other public transport tickets for a wave of the hand instead.