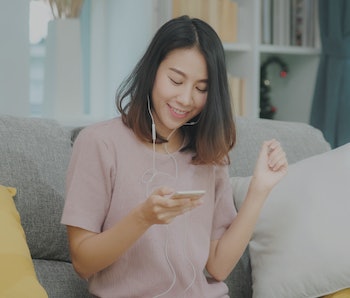 On Monday, 9to5Mac reported on a new lyric search feature in Spotify, first unveiled on Twitter by product designer Lina Wang. Now, when you don’t know the name of the song that’s stuck in your head, searching for the lyrics will populate matches. Apple Music has allowed its users to do this since 2018, but it’s still better late than never. The new feature is part of Spotify’s sudden, intense interest in lyrics which could signal a shift into hardware.

One way or another, thank Musixmatch — Input reached out to Spotify as well as the lyric and metadata company Musixmatch about how the two products are working together. Neither has responded yet to our inquiries, so it’s unclear whether Spotify is using Musixmatch’s lyric search or if it’s simply leveraging the company’s expansive lyric database. Some kind of partnership seems evident based on a congratulatory tweet from Musixmatch founder and CEO Max Ciociola.

The two companies have partnered multiple times before, most recently rolling out realtime lyrics to 26 countries in June. Even this feature put Spotify behind its competitors with Apple, YouTube Music, Amazon Music, and even TikTok’s music app Resso offering the function as early as 2016. Technically, Spotify was early to the party in 2015 with full integration, but its Musixmatch deal dissolved a year later — likely as a result of Spotify's hope for exclusivity. After sulking for a few years (and getting grossly behind in its own market), it seems like it's all water under the bridge.

Spotify speakers — Apple Music’s lyric search feature is made possible through its partnership with Musixmatch which also works with Siri. Other major Musixmatch partners offer voice activation: Amazon allows its users to play songs using only lyrics on Alexa-powered speakers, and Google also integrates lyric search into its Google Assistant.

Spotify has reportedly been working on a smart assistant of its own in addition to a smart speaker, but the value of such a product originally seemed insignificant. With access to Musixmatch’s international lyric database, Spotify could be inching towards a hardware launch, but whether that would be ready in time for the 2020 holiday season remains to be seen.