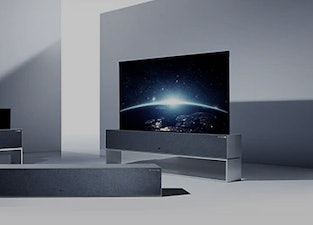 The price of LG's Signature OLED R, a 65-inch TV that can roll up when not in use.

Back in 2018, LG revealed prototypes for what it calls the world’s first and only rollable TV, and now it’s going into production. But you probably won’t get one. The LG OLED Signature R will retail for $100,000 when it goes up for pre-order in August.

That price for the 65-inch TV was briefly revealed on LG’s website before being removed, according to Ars Technica. Now in its place is an option to contact LG to inquire about buying the TV — always a sign that something is expensive.

Rollable is the whole deal — The rollable nature of the LG Signature OLED R is supposed to have a couple of unique benefits. For one, the TV looks like a big soundbar when turned off, but once turned on, a 65-inch screen rises from the base. That’s supposed to let you maximize your room space when the large TV is not in use but still want a killer speaker for playing music.

There’s also a “Line View” where a portion of the screen is extended from the base to show information like a clock, what music you’re listening to, or simply to provide mood lighting. It’s also something else to impress visitors with while showing off your $100K TV.

But considering the eye-watering price, the OLED R’s performance just as a TV isn’t anything to write home about. For example, Ars says that a $3,000 OLED TV from LG’s G1 series can achieve greater peak brightness, which is what really helps HDR content pop with dark blacks and really bright brights. The rollable OLED R has performance similar to LG’s high-end 2020 sets, which again, are significantly cheaper.

The rest of the OLED R’s features are pretty standard for today’s top-of-the-line TVs, however, like four HDMI ports, frame-rates of 120Hz at 4K, and built-in support for Amazon Alexa Google Assistant.

Luxury lifestyle piece — Needless to say, LG markets the OLED R on its website as a product “fit for your luxury lifestyle,” and that’s really what it is. It’s an interesting product, but you’re not buying the TV. What you’re really buying is a statement piece that most people don’t, and can’t afford, to have. Don’t underestimate the willingness of some people to spend top dollar for prestige — millionaires and billionaires are more insecure than you’d like to think. And if you just spend a couple million on a penthouse (or many millions on a trip into the stratosphere), $100,000 is nothing to enjoy a nice view when your TV is turned off.

Still, LG probably isn’t expecting to sell too many of the OLED R’s. Over time, the technology in the OLED R should reasonably come down in price alongside other foldable, bendable, and rollable screens that are making their way into TVs and smartphones.