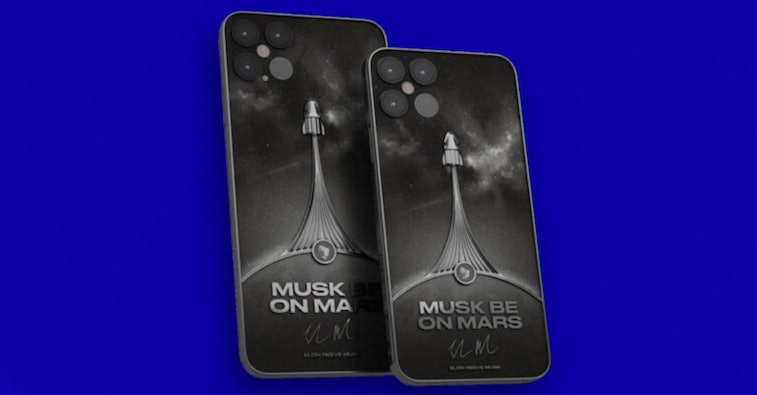 Russian luxury accessories brand Caviar says it is selling an Elon Musk-themed iPhone 12 that it claims contains actual pieces from a SpaceX rocket. The phone is running for $5,830, even though the iPhone 12 hasn't even been revealed yet, and the SpaceX metal apparently comes from the Demo-2 test flight of a Crew Dragon spacecraft.

We would be very wary of this phone's authenticity. The Demo-2 capsule is... well, sitting in a SpaceX hangar being prepared for reuse. Caviar will have to be more specific before you shell over any dough on this one.

Otherwise, the phone is said to feature a titanium body capable of withstanding the space flight you'll never take it on. The back features an etched graphic of a rocket going into space and the phrase, "Musk be on Mars" that's supposed to motivate you. It's pretty ugly though, to be honest. Since we don't even know what the iPhone 12 will look like, assume that this camera array and overall body design is not what the finished product will look like.

Someone will buy it — That price seems pretty absurd considering the iPhone 12 will likely start around $999. That being said, the idolization of Musk has helped the stock price of Tesla surge more than 500 percent this year alone to reach $1,500. Nobody has the type of loyal fanbase he does that will defend him from even the smallest bit of (valid) criticism. If Caviar can authenticate the provenance of the supposed SpaceX scrap metal, someone would surely fork over the dough.

The marketing copy for the Elon Musk iPhone lays it on pretty thick, writing that by owning the phone, "you become a member of the SpaceX mission." Not really.

If we had some advice, maybe you should just buy a regular iPhone 12 and then spend the extra ~$6,000 on just about anything else. Charity, maybe? Oh, and Caviar is also selling a pair of custom, "Musk be on Mars" Nike Air Force 1's for nearly $1,400.