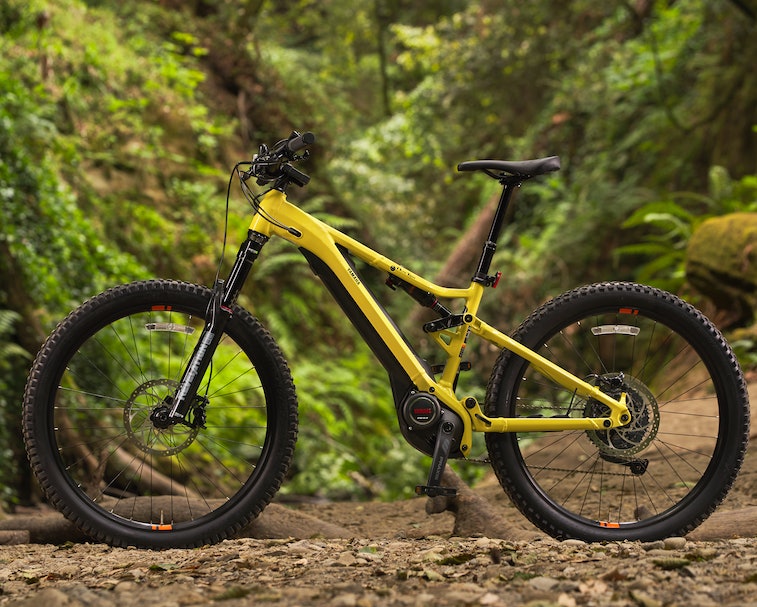 Yamaha has announced a new full-suspension mountain bike, the YDX-Moro, that makes use of a new PW-X2 motor. The company already sells a hardtail mountain bike — one that doesn't have a rear shock absorber — and a gravel bike, but this is its first full suspension model, and it looks mean.

The YDX-Moro comes with a 500 Wh battery and a 250 watt motor, which sounds low (and it is) but that's pretty standard for these big-brand mid-drive motors from the likes of Bosch, Shimano, and Yamaha. The Moro is technically a Class 1 bike, meaning that it can go 20 mph, but the top speed isn't a terribly useful spec for a bike that's meant to carve up trails. These bikes aren't designed to be ridden while ripping a throttle, instead they integrate these motors deep into the bike and provide assistance for things like steep incline climbing.

This is especially the case with the YDX-Moro which, as you can see in the video above, is no slouch on a downhill trail. It has a strikingly steep downtube and an aggressive silhouette overall. Here's how Yamaha described the Moro's frame design in its press release:

Within this exclusive frame design, the drive unit is rotated in alignment with the downtube angle – better aligned with the axel path and the ground. The drive unit simply fits better within the frame than competing models. Placed more vertically in the frame, flex is decreased, clearance is increased, and the rear center measurement is shortened, keeping the chain stay short. Because the drive unit is in a fixed position in the frame, it is tucked in and tracks with the frame while cornering.

Quad Sensor System — The company is also touting something it's calling its Quad Sensor System. Basically it's an embedded computer with a bunch of sensors (Yamaha added an "angle sensor" to accompany torque, cadence, and speed sensors) that try to understand what the rider is doing to provide dynamic levels of motor assist, which will be handy if it works. There's also a "walk mode" that propels the bike forward while you're walking beside it, though this is a feature that's appearing on an increasing number of mid-drive bikes these days.

A tidy frame — One thing that's also notable is that Yamaha has integrated the 500 Wh battery really tightly into the frame. It's difficult to fit a battery into the small triangle of a full-suspension bicycle without building something completely custom (and I would know, as I'm in the middle of retrofitting a full-suspension mountain bike right now), and that's exactly what Yamaha has done. Tucking the battery right under the rear suspension will likely improve balance and handling in addition to giving the bike a nice bump-free look.

A wallet destroyer — Yamaha is holding some of the finer details for a later date in August, but there will apparently be a Pro and non-Pro model with slightly different configurations. The non-Pro model will be available in the yellow finish we see in the press images, and the Pro model comes in blue. We do know that Yamaha is using a RockShox Yari fork on the Pro and a Revelation fork on the non-Pro model, and a quick peek around the press pictures offers a look at some high quality parts. So what does that infer about the the price? The YDX-Moro is $4,499 and the Pro is $5,499. That's right in line with what we were expecting for the non-pro model, but it's great to see the upgraded fork and other components come in at under $6,000. This is right in line with bikes from Cannondale and Trek, though the Pro is definitely cheaper than the two aforementioned brands' most high-end models. Both bikes will be available at dealers "as early as September," according to a Yamaha representative.

Update: This post has been updated with to reflect new pricing and availability information.

This article was originally published on July 29, 2020