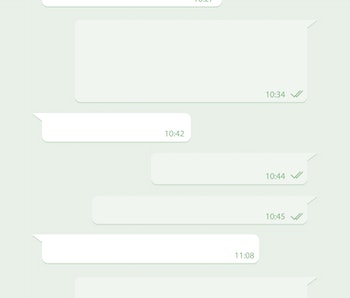 Facebook has killed its plans to incorporate advertising into WhatsApp, according to The Wall Street Journal. The company’s team working on the effort was disbanded, and Facebook told Business Insider it will instead shift its focus towards allowing businesses to communicate with their customers through the messaging app.

WhatsApp was slated to get ads in the Status section of the app sometime this year — Facebook teased the product last summer. Status is basically the WhatsApp equivalent to Instagram Stories.

Advertisements are inevitable — Facebook spent a whopping $22 billion buying WhatsApp in 2014, and the messaging service is one of the most popular in the world, meaning it’s fertile ground for the company’s powerful advertising machine. But co-founders Brian Acton and Jan Koum claimed they had a promise from CEO Mark Zuckerberg that WhatsApp wouldn’t see advertising, and Facebook’s change of heart was a motivating factor in their departures. The two wrote an anti-advertisement missive back in 2012 on the WhatsApp blog.

The company used to charge users $1 per year to fund its business in lieu of ads. That pales in comparison to the $7.26 Facebook makes per user every quarter through advertising. That high revenue from advertising is also why Facebook hasn't seriously considered a paid version — it would have to cost a lot to be worth it to the company.

Considering that the app has a whopping 1.5 billion users, and Facebook’s business is built on advertising, it’s hard for me to believe WhatsApp will remain ad-free forever. And sure enough, Facebook told Business Insider that ads are still a long-term opportunity. Facebook has to show investors continued growth, so expect it to turn this faucet on when other Facebook properties begin to slow.