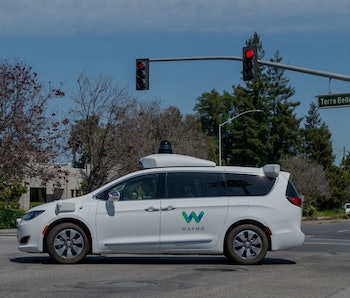 Waymo is returning to the streets of Phoenix after pulling its self-driving cars back in March in order to prevent the spread of COVID-19. The company, which is a division of Google, will only resume testing for now, not rides to the general public. Passenger operations through its Waymo One service will resume at a later, unspecified date.

The company says that, in the manner of other businesses, it will be instituting new safety and sanitation protocols. Among other things, Waymo facilities will receive regular deep cleanings and vehicles will be cleaned multiple times per day. Employees in and outside the car will be given protective gear and required to wear masks at all times, except when driving alone. Each Waymo car is typically operated by two backup drivers but that will be limited to one for now.

Driver concerns — Some of those drivers might feel uneasy about Waymo beginning operations again considering that new reported cases of coronavirus have flattened but not yet begun to fall nationwide. In Arizona, more than 10,000 cases have been reported and 450 deaths. Retail businesses in Arizona were allowed to resume in-stores sales today, and restaurants will be allowed to offer limited dine-in service starting next week. It's yet to be seen how quickly customers rush back, however.

To its credit, Waymo has continued to pay its drivers since the shutdown began two months ago. That's compared to competitor Zoox, which cuts its workforce of test drivers.

At the same time, drivers for Waymo are being asked to go back to work unless they're at high risk for COVID-19 or have child care issues. That might put them in a difficult position of choosing between income and health concerns.

Simulated vs real driving — Waymo says that it continued testing its autonomous software during the pause using simulated environments. The company explains that its simulated driving works by taking scenarios captured by its real-world cars and then modifying them in various ways to see how the car reacts. For instance, a real-world Waymo car might capture a scene of a distracted driver swerving in front of the autonomous car. Using simulated driving, Waymo can add a biker or pedestrian to the scenario and see how the car decides to react with the new variable.

Clearly since simulated driving builds off real-world miles, Waymo decided it needs to get back on the road.