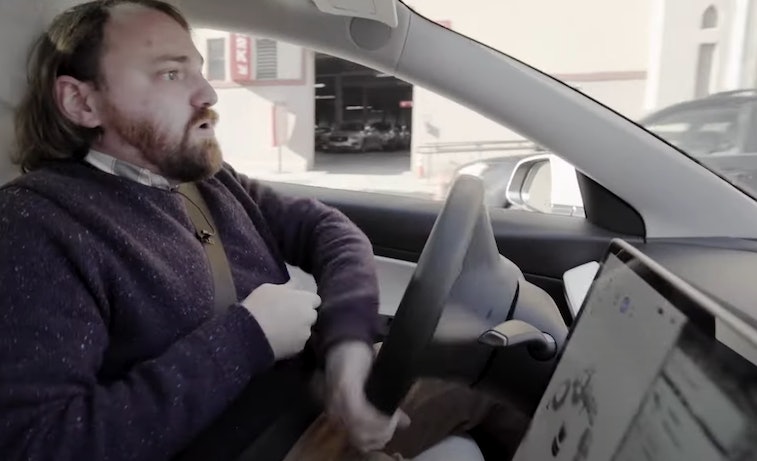 Seriously. See for yourself just how “Beta” FSD really is:

What else did we expect? — Watching Ballaban bravely venture through downtown Brooklyn in a “self-driving” Tesla is an incredibly stressful four minutes, but to be honest, it’s also completely unsurprising.

Tesla has tried for months to assure everyone its “Full Self-Driving” mode is totally fine, and just needs a bit of smoothing out from its current, limited beta release results. Never mind the 12,000 cars recalled over a comms error in their FSD updates that caused sudden, unexpected, potentially deadly emergency brake deployment, or the company attempting to suppress its abysmal in-house testing reports, or Elon Musk straight-up saying the Beta isn’t where it should be.

The Technoking cultists are unamused — What’s also unfortunate, but equally easy to predict, is the rancor this video is already be generating among the Tesla Bro community. The YouTube upload has been up for less than a day and is already getting review bombed into oblivion by Musk loyalists. The comment section reflects the same issue, with apologist after apologist decrying the reviewer’s driving skills and nervous energy. You’d be nervous too if your ride was trying to kill you.

“I’ve watched a ton of self driving beta videos and I’ve NEVER seen this many problems with it. Hmmm,” one commenter writes, with another posting, “I personally use FSD Beta and it works as I expect as a BETA! Not going to be out of BETA until sometime next year. Elon should take away your FSD Beta as you are just doing a hit job.”

Beta testing with alpha consequences — The thing is here, pretty much everyone is well aware the technology is currently in its beta phase... but it’s one thing to beta test a literally harmless computer game in your living room, and another to decide to throw this kind of software out on the open road.

Doing so is dangerous, reckless, and potentially deadly — both Elon Musk and Tesla know this. But they have outlandish promises to keep to buyers and investors alike.

More: The Fisker Ocean EV is about to give Tesla a run for its money