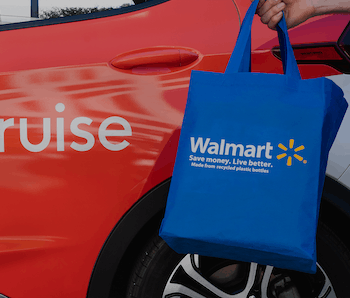 With its TikTok deal looking more like a bust with each passing day, Walmart has moved onto other future-forward plans. Today the company announced a new partnership with Cruise, an electric vehicle manufacturer, to test self-driving delivery vehicles.

The robo-delivery service will have its first pilot program in Scottsdale, Arizona, beginning early 2021. Customers will be able to place orders from their local Walmart stores, and one of Cruise’s self-driving vehicles will take to the streets for a quick delivery.

Walmart has had mixed success with robotic automation thus far; the company canned its shelf-stocking robots just last week, but it’s also been able to deliver COVID-19 tests via a new drone partnership. If this Cruise test works out, though, it’ll be a good indicator that this kind of service might do well on a larger scale, too.

Taking on Prime — It’s no secret that Walmart’s biggest competitor is the tech overlord known as Amazon. With its enormous fleet of delivery vehicles and loyal fanbase, Amazon’s online shopping services have put Walmart’s to shame in recent years. Walmart recently launched its answer to Amazon Prime, called Walmart Plus, to try and close the gap a little and give consumers an alternative for speedy deliveries.

Self-driving delivery vehicles — especially all-electric ones — could be just the boost Walmart needs to get a leg up over Amazon. Even then it’ll be difficult to do so: by the time Walmart receives the necessary permits for a large-scale autonomous delivery operation and actually sets up a network of those self-driving cars, Amazon will already be onto the next big thing.

Self-driving is good for something, at least — With more investors than ever, you’d think autonomous vehicles would be nearing a point where we could catch up on some sleep while we get driven across town. But we just don’t have safe enough technology to make this a reality yet — just ask Tesla, which has been promising its AutoPilot system will soon be totally hands-off for years now (and again, recently).

Instead, it’s increasingly looking as if self-driving tech will be more useful in situations like Walmart’s, where it’s not humans but packages and groceries sitting in the car. The retail market has more to gain from the technology, at least right now. Even Waymo, which is at this point using fully autonomous vehicles for its taxis, is required to watch the car’s activity from nearby in case of an emergency.

Walmart has partnered with both Ford and Nuro, a smaller company, to test similar ventures in the past, but neither amounted to much. We won’t hold our breath — but if this test does well, it could be Walmart’s ticket to home delivery supremacy (or at least a more secure second place).