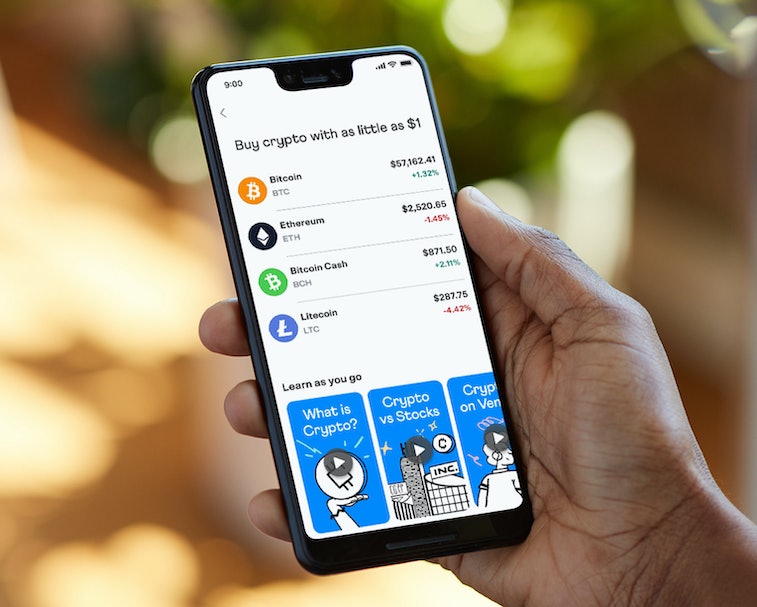 Venmo is jumping on the cryptocurrency hype train. The social payments app has added support for buying, selling, and holding cryptocurrencies.

This addition was expected, as parent company PayPal announced earlier this year that it was going all-in on cryptocurrency across its suite of products.

Using funds from their balance or linked accounts, Venmo users can trade Bitcoin, Bitcoin Cash, Ethereum, and Litecoin. Users cannot send cryptocurrency to their friends and family, but considering the steep run-up in cryptocurrencies over the past year — Bitcoin’s price grew 224 percent over 2020 — it wouldn’t be financially prudent to do so anyway.

PayPal is playing catch up in the space of crypto, as its biggest rival, Square’s Cash App, added support for Bitcoin trading all the way back in 2018. Crypto represents about five percent of Square’s profits, according to its recent earnings reports. The company recently dropped fees for trading Bitcoin, too.

Crypto boom — The growth in cryptocurrencies over the past year has been attributed to various causes. Amid the pandemic, younger individuals saw the stock market booming and the rich getting richer as the economy continued to boom despite record unemployment. Few regular people own stocks, and crypto represents a new thing they could get in on early.

At the same time, mainstream companies like Square began to support crypto, lending the digital money more credibility and making it easier to place small bets. For professional investors, crypto could be a hedge against the U.S. dollar becoming less valuable due to stimulus or challenges from China. Tesla earlier this year invested $1.5 billion of its cash holdings in Bitcoin, a move that further helped keep crypto in the headlines, and a further step to helping legitimize it in the minds of institutional investors.

This confluence has led to a tidal wave of support, and the recent IPO of cryptocurrency exchange Coinbase only adds fuel to the fire.

Risk — Proponents of cryptocurrency argue that all currencies, like the U.S. dollar, are only worth as much as people decide they are. Though Bitcoin doesn’t have a powerful economic power backing it — people have faith the U.S. is a strong country — so cryptocurrencies remain quite volatile. But the total amount of Bitcoins is fixed, protecting against governments printing more and making it less valuable.

It remains to be seen whether the recent boom in cryptocurrencies will hold after the pandemic subsides and the economy returns to some normalcy. Venmo is including how-tos and guides in its app to educate users to practice caution.