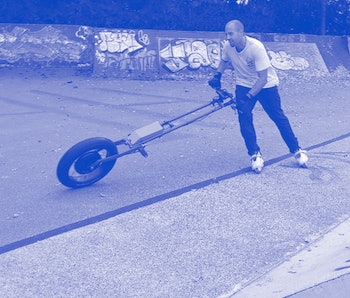 Every rollerskater, inline skater, or skateboarder has at one time or another wished they could go faster, or that they could get a little assistance up a steep hill. It's precisely those impulses that the creator of Veelo, Brice Jamieson, wants to provide a solution to.

Jamieson has turned to Kickstarter to bring the Veelo to life. Resembling the front portion of a motorcycle someone's cut in half — or the front part of a wheelbarrow someone's added a motor and battery to — the Veelo is essentially a powered wheel with handlebars you can use to put yourself along, no matter what sort of wheel-based transport solution you favor.

The tire itself is four inches thick, comes with a hub motor that can propel you up at up to 20 mph. You have a brake lever plus an LED screen that keeps you updated on speed, remaining battery, and other information. Veelo also has a suspension system, direction indicators, and there's a rumor that there's a Veelo app on its way. This is what it looks like:

Even better than the wheel thing — If you use rollerblades, skateboards, or any other form of non-electric wheels, Veelo is the only thing out there that can give you a sensational dose of velocity on demand. As the Kickstarter campaign explains:

Veelo is a new way to enhance mobility for skates, blades, boards, and wheels. It combines the effortless power of an electric hub motor with a flexible concept that encourages you to develop your own ride style. Whether you're on inline or a longboard, the unmistakable sensation of velocity is there the first time you pick up Veelo.

Coming next year — A pledge of just under $1,000 will secure you a Veelo (assuming the project reaches its target of $115k, that is) and you can expect it to around in July 2021.

Please be careful — Given its top speed, we'd suggest keeping Veelo use limited to places where crowds are few and far between and the likelihood of a crash is low. We've seen what happens when you don't have robust security mechanisms in place with the likes of the electric moped company Revel, whose reputation has been tainted since at least two people have died on its two-wheelers.

Jamieson sounds like he understands these worries. "We're also very aware of safety regulations and the variety of local laws about electric mobility," the Canadian entrepreneur wrote, "and we're already working on how to make sure that Veelo is on the right side of all of them."