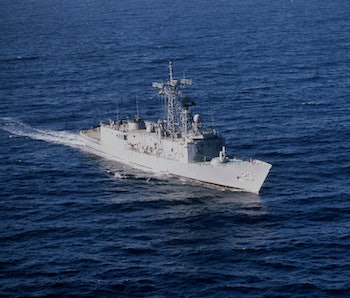 The United States Navy has officially contracted Lockheed Martin to help it develop a fleet of large, unmanned ocean vessels for use in various capacities, including potentially combat, apparently. That's right: the Navy's going to have robot murder ships at its disposal somewhere down the line. What could possibly go wrong?

As if lethal, semi-autonomous computer systems patrolling our skies and cities wasn't enough, the American military now apparently wants to extend these surely foolproof inventions across the seven seas. Military-industrial complex mainstay Lockheed Martin won out from a pool of companies during the Navy's initial phase of its Large Unmanned Surface Vessel (LUSV) competition, and will now work alongside the shipbuilders at Vigor Works, LLC, out of Oregon over the next year to "manage the program, deliver platform integration, systems engineering, combat management, automation and cyber solutions," according to a press release.

The first goal for the $7-million dollar partnership will be to integrate autonomous systems into an existing commercial ship design within the next 12 months. After that, the competition's "Detailed Design and Construction" phase begins, which we assume is about what it sounds like. From there, well, unmanned murder boats can begin roaming the seas.

Distributed, networked, and more lethal — This is far from the first LUSV to roam international waters, however. As Lockheed Martin's statement notes, the company already produced "16 USVs of various designs and sizes," which is just so comforting to hear. That said, this is arguably the largest step forward for the U.S. Navy in incorporating these kinds of autonomous programs into its fleet.

The end goal is to create ships that can perform both mundane and high-risk duties with little to no oversight, leaving the more complex tasks to humans at a safer, more remote distance. Or, as Lockheed more bluntly puts it, "The Navy’s vision for USVs will enable the fleet to fight as a distributed, networked and more lethal force. USVs will provide extended presence across the globe with reduced risk to sailors and increased obstacles and complications for adversaries."

We're all for new, cutting-edge ways to keep more troops out of harm's way, but c'mon. Are we, like, that hellbent on engineering our own robot apocalypse? The answer, according to the Navy and Lockheed Martin, appears to be a fairly resounding, "Yes, please." Also, you know if they don't do it someone else will, which really means not doing it would simply be leaving money on the table.