“These companies are making profits and revenue... We also want to make sure that success trickles down to the worker.” 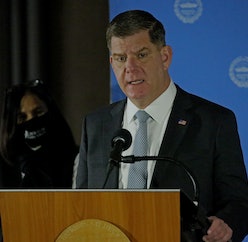 Gig economy companies have a new foe. In an interview with Reuters, U.S. Labor Secretary Marty Walsh said that gig workers at companies like Uber and DoorDash should be classified as workers and entitled to benefits. Walsh is a former union member and mayor of Boston.

Following the news, shares of Uber, Lyft, and DoorDash fell by as much as 12 percent. It’s almost as if investors knows that their business models rely on labor exploitation.

“These companies are making profits and revenue and I’m not (going to) begrudge anyone for that because that’s what we are about in America. But we also want to make sure that success trickles down to the worker,” he continued. Many gig economy companies actually aren’t making profits, but both Uber and Lyft have said they think they can get there this year.

Uber and DoorDash emphasized in statements that their workers appreciate flexible work schedules. But the jobs pay very poorly and come with no protections like unemployment or sick leave. Drivers pay their own expenses for their vehicles.

The International Labor Organization estimates upwards of 43 percent of people last year were gig workers, which concerns some that these people won’t have money for retirement or to support their kids’ upward mobility.

Inequality — There’s a reason stock market investors made out like gangsters throughout the pandemic while the actual economy suffered. CEOs improved bottom lines by cutting costs — which is to say, they fired people. And gig economy companies were able to adjust quickly because none of their workers are actually employed or entitled to any support. The boom in the stock market as many have lost their homes or died from COVID-19 are related issues. Uber and the like didn’t create these inequalities, but they have been rewarded for taking advantage of a weak labor force. Walsh, being a former union member, is expected to push strong pro-labor policies.

As parts of the U.S. have begun to reopen, gig economy companies are faced with shortages of drivers, who stopped working after the pandemic killed demand. To help out workers during that time, the companies didn’t pay them unemployment, of course, but convinced the federal government to do it to the tune of $600 per week. That’s a lot of money considering how much they could make driving for Uber.

“If the federal government didn’t cover the gig economy workers, those workers would not only have lost their job, but they wouldn’t have had any unemployment benefits to keep their family moving forward. We’d have a lot more difficult situation all across the country,” said Walsh.

If these companies are forced into paying workers even the minimum wage and benefits and as a result can’t survive as businesses, they probably just shouldn’t exist.