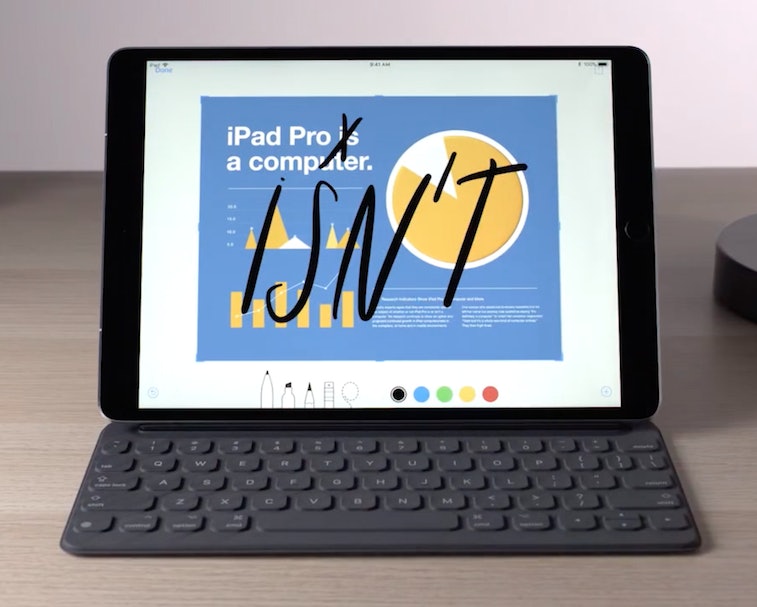 There’s a never before seen iPad Pro commercial that was dropped online yesterday, and it’s quite something.

Titled “iPad Pro Is/Isn’t,” the thirty-second spot opens with a user opening a presentation slide on their iPad that reads, “iPad Pro is a computer” — only for them to screenshot it and use the Apple Pencil to write “isn’t” over the slide. The user continues to do this, batting away suggestions that the iPad is a computer, all the while navigating through other productivity-centric apps, like Word and the native filesystem. It's a fun ad!

The point, I guess, is to get right up in the face of naysayers and show how silly it is to say the iPad isn’t a computer when look, it’s doing all these “computer” things. Apple has been fighting against this narrative ever since it launched the Pro line with support for pen input and multitasking.

The edge cases are a problem at this price — As a happy iPad Pro user myself I generally agree with Apple. Most of my work happens in either a browser or Google Docs, and it’s rare that I need to switch from my iPad to a desktop. The iPad software has come a long way in recent years.

But, you have to be really confident in your workflow and know that it won’t require desktop software — and have a solution in the event you do need it. It’s just safer for most people in need of a computer to buy a traditional desktop considering the iPad Pro’s $799 starting price without a keyboard. And that’s for a base 11-inch model which is, frankly, too cramped for multitasking. For the same price, you can get a great, highly-functional Windows laptop.

The commercial was published alongside other unreleased Apple commercials onto a website called The Apple Archive, which itself launched yesterday. You might be wondering where these commercials came from or how the site’s owner, Sam Henri Gold, managed to obtain them. All he offered in an interview with 9to5Mac, though, was, “while I’m not willing to share how I’ve obtained them in order to protect my sources, they’ve been very accommodating to this very charming young man and his passion project.”