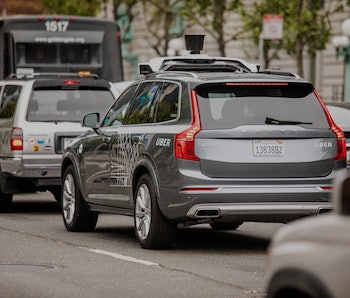 Five years, a fatal accident, and billions of dollars later, Uber is exiting the fledgling self-driving car industry with its announcement that it will sell its Advanced Technologies Group (ATG) to competitor Aurora Innovation. The company isn't completely raising the white flag, however, and will invest $400 million in Aurora as well as take a 26 percent stake in the company.

That could end up being a good deal for Uber, which stands to gain from any upside if Aurora's full-stack self-driving technology reaches commercialization. Aurora has raised billions in funding; by partnering up rather than competing as rivals, the companies can combine their research and development resources rather than each trying to develop self-driving tech in parallel. Uber's self-driving team based in Pittsburgh will join Aurora.

Consolidation — The deal to sell ATG is just the latest Uber has made to consolidate in a competitive market and cut the billions it has bled over the years to expand into all types of mobility. In China, the company ended a fierce battle when it took a 15.4 percent stake in Didi Chuxing and Uber China merged with the local incumbent. Uber more recently sold its Jump dockless bike and scooter division to Lime and took a stake in that company as well.

Reducing the overall competitive landscape means that Uber won't have to burn billions in order to draw customers from similarly deep-pocketed players.

While Uber has said that self-driving cars could be the future of the company — removing drivers from vehicles would eliminate its biggest expense — the unit burned billions, with reports indicating that its cars still can't drive more than half a mile without encountering an issue. And the company has faced ugly PR fiascos, from an IP theft lawsuit with Google's Waymo, and a fatal crash in Arizona that forced the company to temporarily pull its cars off the roads.

How long it will take self-driving to reach commercialization is still a big question mark. Waymo began opening up its fully driverless ridesharing service to beta testers in Arizona in October, but that market has ideal weather conditions and it's unclear how the cars would handle snow-covered streets. The payoff when self-driving comes to fruition could be huge, however, and Uber will hope to have priority access Aurora's technology for use in its network. The founders of the start-up all came from other self-driving projects, including Waymo and ATG itself.

Bright side — Not all of Uber's risky bets have ended in retreat, to be sure. Uber's investment in food delivery has proven to be a savior for the company at a time when people have stopped going out and started ordering in. In the most recent quarter, Uber's core ridesharing business declined 52 percent to $1.37 billion while its Eats delivery business saw revenue increase by 190 percent over last year to $1.14 billion. The company recently doubled down by acquiring Postmates to become the number two food delivery player in the U.S.

Investors for years criticized Uber for investing too heavily in concepts outside of ridesharing, worried it would never turn a profit. But by focusing on ridesharing and delivery, Uber is turning a leaf and being conservative, keeping its dominant businesses while taking a stake in competitors outgunning it elsewhere. The company is valued at more than $94 billion as compared to $14 billion for Lyft, which only offers U.S. and Canadian ridesharing and limited micromobility rentals.