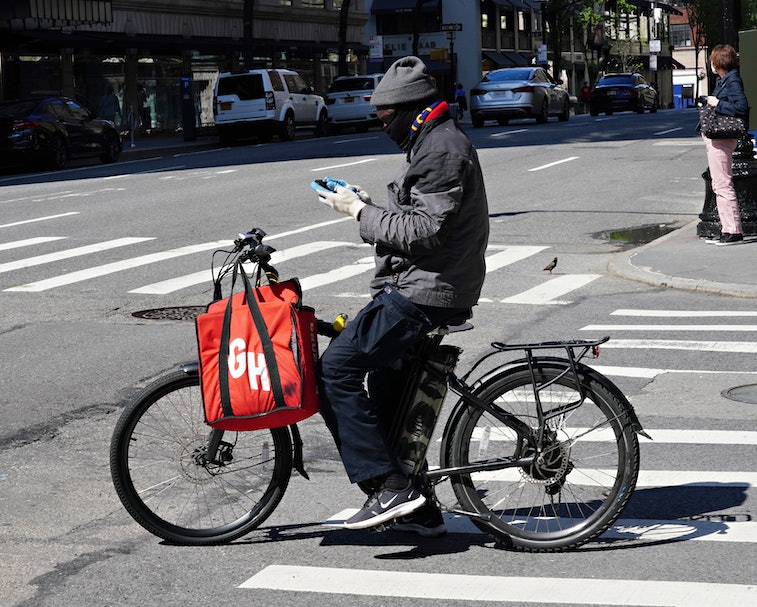 Uber is making moves while the market is down. Today it made an offer to acquire food delivery company Grubhub, according to Bloomberg. The purchase would make Uber the biggest player in U.S. food delivery and bring the business closer to profitability by eliminating a major competitor. Neither company has confirmed the news or a price.

According to Second Measure, which analyzes credit card transaction data to unearth trends, Grubhub controls roughly 30 percent of the U.S. food delivery market while Uber Eats is at 20 percent. But combine the two and you get a formidable force in an industry where players are still competing for dominance.

The business has always been unprofitable, though, because Uber has to compete with deep-pocketed rivals including DoorDash and Postmates, which have used billions of dollars from investors to deliver food at a loss in hopes of becoming the top player. Just like Uber has done itself in the ride-hailing sector.

Uber doesn't disclose losses from its food delivery business but estimates suggest it loses roughly one dollar for every dollar it brings in thanks to driver incentives and frequent free deliveries for customers. Grubhub is already public and profitable, though the increased competition in recent years has reduced its earnings substantially.

Normally the consolidation of two major players raises antitrust concerns, but the significant losses due to intense competition might make it an easier sell for regulators. Prices may well increase for customers as a consequence, however. Someday we might look back on these days fondly as the times when investor money subsidized the finer things, like free delivery of a Big Mac.

How times have changed — Investors were long skeptical of Uber's entry into food delivery because of the stiff competition, but coronavirus has completely flipped that sentiment. Uber and Lyft's traditional ridesharing businesses saw a roughly 70 percent drop in ridership in April but, conversely, the increase in food delivery has helped Uber offset some of its losses. Lyft doesn't offer food delivery so the pandemic will likely hit its revenue harder.

Both Uber and Lyft have laid off or furloughed thousands of employees in recent weeks, and Uber has moved to shore up its business by selling its Jump dockless bike business to scooter company Lime. While it may cut its losses on bicycles, doubling down on food delivery with a Grubhub acquisition could help the overall business's long-term prospects.