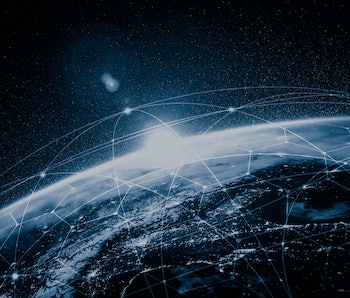 A Voltron of suck is forming in the broadband satellite internet industry. Amazon’s Project Kuiper and Verizon have announced a new partnership to collaborate on “connectivity solutions” that compliment the former’s upcoming satellite constellation with the latter’s 4G / LTE and 5G network systems.

“There are billions of people without reliable broadband access, and no single company will close the digital divide on its own,” Amazon CEO Andy Jassy says in an official statement. “Verizon is a leader in wireless technology and infrastructure, and we’re proud to be working together to explore bringing fast, reliable broadband to the customers and communities who need it most. We look forward to partnering with companies and organizations around the world who share this commitment.”

Despite the two companies’ loathsome strangleholds on their respective industries, the pairing face a steep uphill battle against competitors like OneWeb and the objective leader of the pack, SpaceX. As Geekwire reports, Project Kuiper has so far conducted only nine rocket launches with satellite payloads. Starlink, meanwhile, has over 1,650 satellites already in orbit.

A Voltron of suck is forming.

A lot of catching up to do — Amazon may be sinking billions of dollars into Project Kuiper, but it’s unclear whether that will be enough to fulfill the deal struck with the Federal Communications Commission. Last year, the FTC granted Project Kuiper the go-ahead to begin launching over 3,000 satellites into low-earth orbit... with some deadlines. First, Amazon will need to have at least half of its fleet up above our heads by 2026, with the remaining inventory delivered by the end of the decade. It’s a tall order, but to be fair, if anyone can accomplish those logistics, it’s probably Amazon, for better or worse (Worse. The answer is worse.)

Eyes on the 5G future — Verizon, for its part, is focused squarely on moving forward into new eras of high-speed internet and satellite capabilities. Earlier this year, the telecom giant announced it would finally be discontinuing its 3G network support at the end of 2022. It’s a long time coming for the company, which stopped activating 3G phones in 2018 with an eye to originally shut down the network by the end of this year, but delayed to finish upgrading existing customers to at least 4G/LTE.