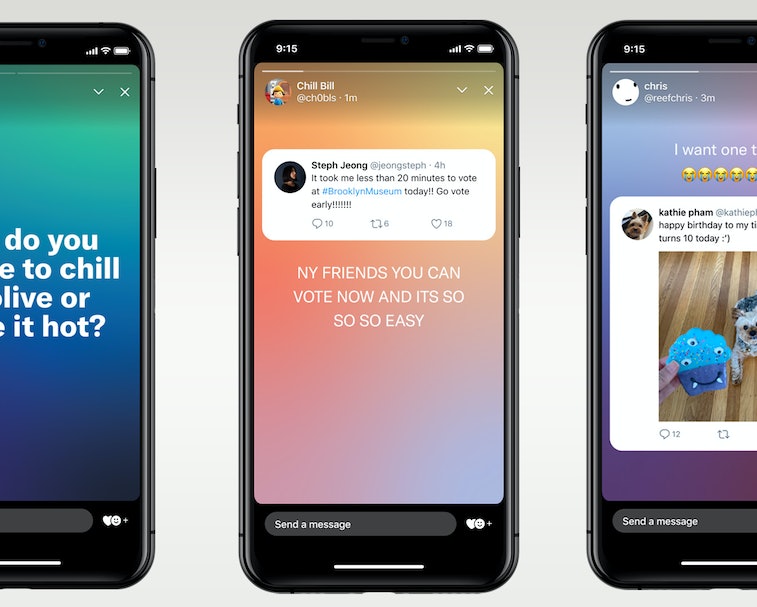 Twitter said today that it's slowing the introduction of its Fleets product to fix "performance and stability problems." Fleets is Twitter's take on the Story format introduced by Snapchat and later popularized by Instagram. Users can share their thoughts as Fleets, separate from the feed, and they disappear after 24 hours. It's supposed to encourage users to share more of their fleeting thoughts that might not rise to the level of something interesting enough to put on the permanent record in hopes of going viral.

Early bugs — Fleets was rolled out worldwide on iOS and Android starting Nov. 17 after months of testing in smaller markets, so it's no surprise that there are some growing pains. One issue users have reported is that the feature occasionally freezes when users try and post new Fleets. If users try and see who's viewed their Fleet and that list is long, the iOS app may freeze for ten seconds or longer.

Other problems regard the implementation of the feature. Users can tag people who've blocked them, allowing users to direct their followers to harass someone, and the victim doesn't receive a notification indicating the source behind the brigading. Users also don't receive notifications when their tweets are shared in a Fleet.

Slow product development — Fleets marks the first time Twitter has introduced a major new feature in years. Whereas Instagram's interface has changed markedly with, among other additions, the introduction of Stories, IGTV, shopping tools, a clone of TikTok, and more, the fundamental Twitter product has remained unchanged. Just look at the Twitter app as it was in 2017 — it looks nearly the same today.

That's not necessarily a bad thing. People who use Twitter love the service for its unique place in the world as a water cooler, where users can just drop in and shoot the shit about things that interest them with like-minded individuals. And the company has focused more energy recently developing better tools to combat harassment, a worthy cause for a site notorious for bullying. It has also tried to improve discoverability for new users by creating lists around popular topics like tech and politics. It spent a lot of time fighting misinformation during the recent presidential election. For a relatively small company, those are better uses of time than cramming the app full of new features before it puts out existing fires.

More to come — Fleets is much less comprehensive than the Story features from Instagram and Snapchat, but more enhancements like face filters and interactive options like polls will surely come in the future.

There's been some reporting that Twitter was pushed by activist investors to introduce Fleets as a means to grow faster, since the company's active userbase is not much larger than when it went public in 2013. Users may post more frequently in Fleets because there aren't public metrics to make people feel like they need to share particularly interesting thoughts. And Twitter could use the feature as another place to insert advertisements. CEO Jack Dorsey however denied that it was pressured by anyone to introduce Fleets.

Twitter is also experimenting with audio chatrooms akin to Clubhouse, where users can create rooms to have casual voice chats with others. The company will need to address concerns around harassment and abuse, however, as Clubhouse has been notorious as a place where hate speech thrives thanks to the difficulties of moderating audio.