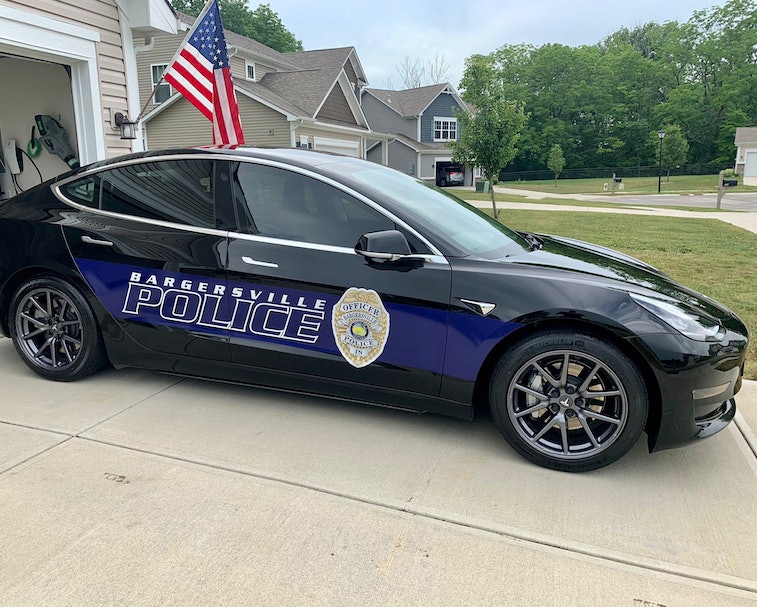 The head of the Bargersville, Indiana police department, chief Todd Bertram, believes his Tesla Model 3 fleet can pay for itself within two years, Electrek reports. The department bought its first five electric vehicles in 2019 and expects it will continue to update its fleet as the Model 3 has proven a solid alternative to the Dodge Chargers they are replacing.

The numbers suggest that even at a higher initial price, many businesses reliant on fleets of vehicles may want to consider whether the time has come to purchase EVs. Which is another great endorsement for the electric carmaker that this week became the world's most valuable car company.

Breaking down the estimate – At $41,000 for the Standard Range Plus variant, the Model 3 is still more expensive than those Chargers. But squad cars in Bargersville typically have a lifetime of just six years because they're driven so frequently, and Bertram estimates annual gas savings of about $6,000 from the switch. Bertram is also factoring anticipated maintenance savings into his estimate that the Model 3s will break even with the cost of a Charger in just two years, and then pay themselves off in the following years.

Tesla has dealt with lots of reliability issues over the years, most recently seeing touchscreens in older Model S vehicles fail – a serious issue considering Tesla has replaced many hardware buttons with virtual controls. The company has been able to patch many issues over time, though, and regain its Consumer Reports recommendations. Bertram says a year-old Model 3 in his fleet has only needed its rear tires replaced, presumably due to extensive use that's expected with police cars.

Chases will end much faster – When Bargersville first purchased the Model 3s, Bertram attributed the decision to more than just fuel savings. Electric vehicles are also just faster than gas cars – the Model 3 goes from 0-60 mph one second faster than a Dodge Charger. "Many times when you get a car that is in our cost price range, you sacrifice performance," he said at the time. "With Tesla, the performance is better than the cars we are currently driving. It’s amazing, it’s smooth, it’s powerful, it handles great."

EVs also, obviously, don't release harmful emissions into the air. Traditional police cars have to idle their vehicles even just to operate a radio scanner, so there's a multitude of large and small benefits to such a switch. And it's the least law enforcement can do right now when the public otherwise believe they can do no good.